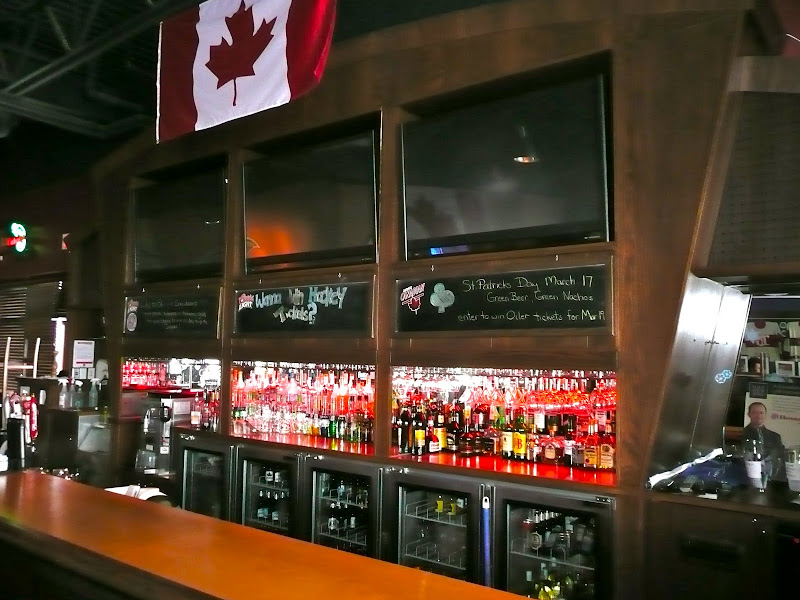 When Westlock Boston Pizza opened it’s doors seven years ago the Facebook just launched with 1,300 members and HDTV was slowly beginning to roll out in Canada.  The 55” Toshiba rear projection TV’s were state of the art for their time but after seven years of service both the Rear Projection Back Bar TV’s and 27” CRT tube TV’s were due for replacement.

Even though the old style CRT TV’s were only seven years old and still working the tube TV’s instantly dated the look of the lounge not seven years but more like two decades.  While the rest of the lounge was in good shape and the paint, tables and upholstery were all in good condition the retro style tube TV’s made the place look much older than it’s age.

Since the budget was tight Doyle came up with a three-step plan which would achieve Boston Pizza’s goals, bring their AV System system up to today’s standards, include options for future expansion and upgrade,  all while meeting their budget requirements. 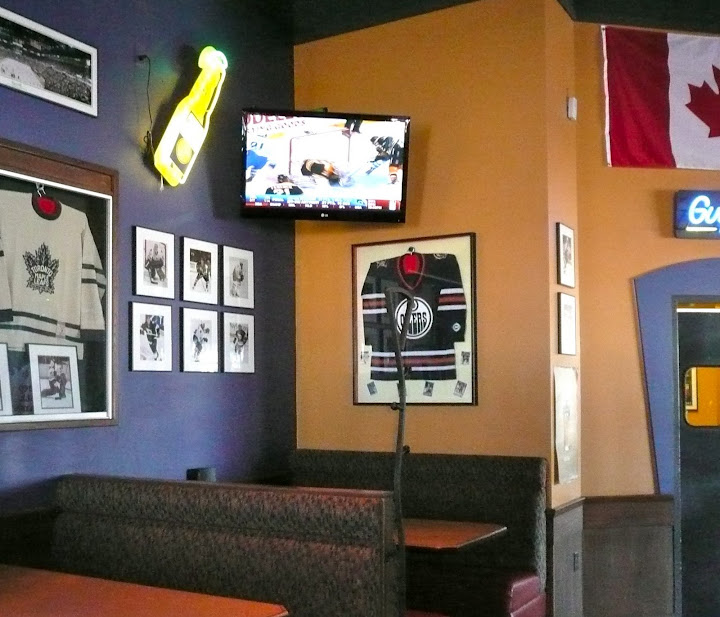 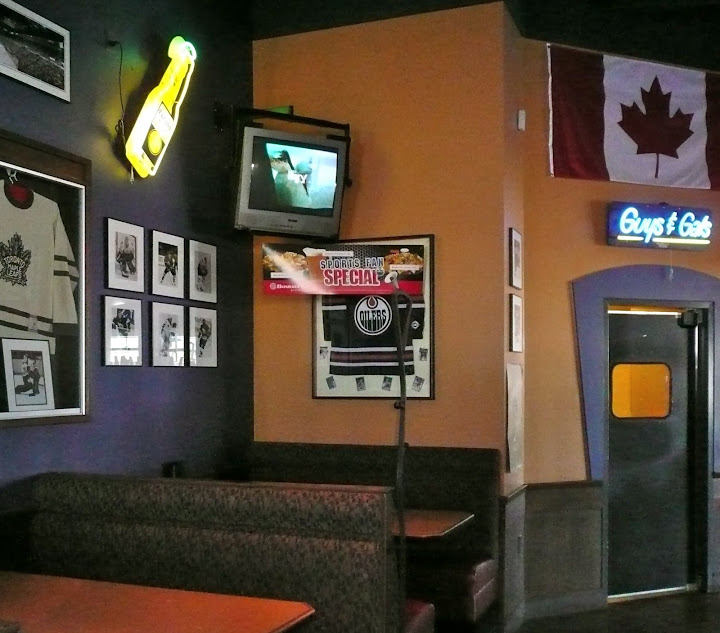 The first step was to remove the old and aging 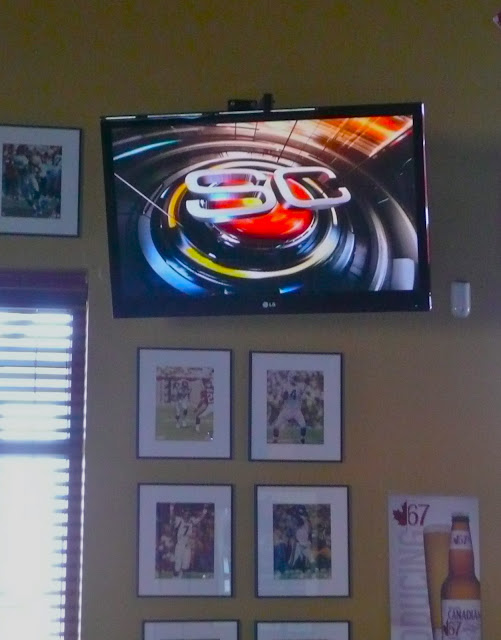 Tube Style CRT TV’s and replace them with New LG Flat 42” Flat Panel widescreen TV’s.  The Old TV’s were 27” Sanyo and were Silver Grey in color which was in vogue back in 2004.  DJ’s Sound City was able to modify the existing TV brackets to work with the new LG flat panels and minimize the cost of upgrading and installation labour.  The old 27” Tube TV’s were removed and new Flat Panels installed in one day.  It’s amazing what happen to the look of the lounge when just the tube TV’s were replaced with flat panels.  The lounge instantly looked new and modern, customers immediately took notice as the big, bright, clear, crisp picture on the 42” LG Flat Panels looked incredible compared to the old 27” Tube TV’s.

After the tube TV’s were replaced the next step was to replace the Rear Projection TV’s in the back bar with shiny, new 60” LG HDTV Flat Panels.  The back bar millwork was originally designed to house three Old Style Rear Projection TV’s and had TV Pockets built 24” deep to allow the large and heavy rear projection TV’s to sit inside the cabinet.  Unlike today’s Flat Panel TV’s the older rear projection 55” Toshiba TV’s had speakers built into the bottom of the TV cabinet which made the cabinet dimensions for the TV pocket almost square.  The back bar was designed with a cover plate and chalkboard made to fit in front of the rear projection TV’s so only the screen would show giving the illusion of a 16:9 Flat screen TV when in actuality the TV cabinet was 4:3.

The design of the back bar mill work was going to provide some problems for the installation of new Flat Panel TV’s.

2 – The shape of the TV pocket without the front speaker cover plate was square while the new Flat Panel TV’s were rectangular 16:9.  This meant if the front cover plates were removed and the TV’s would just sit on the floor of the TV pocket it would look incredibly silly with an empty space or void above the TV larger than the TV itself.  Placing the TV’s on their base and installing them this way would just not work.

3 – To maintain integrity to the look of the back bar millwork it was decided that any mounting solution must allow for the existing speaker cover plate to remain intact as part of the bar wood work.

In order to install the new 60” Flat Panel TV’s it was going to be necessary to modify the mill work in the back bar by building a false inside each TV pocket to mount the Flat Panel TV’s too – the next question was who was going to do the mill work and how long would it take.  Mill work and finishing wood work and often be slow and expensive.  DJ’s Sound City was able to provide pricing to complete the mill work in-house at a very competitive rate which was less expensive and quicker than hiring a separate mill worker.

A trim sample of 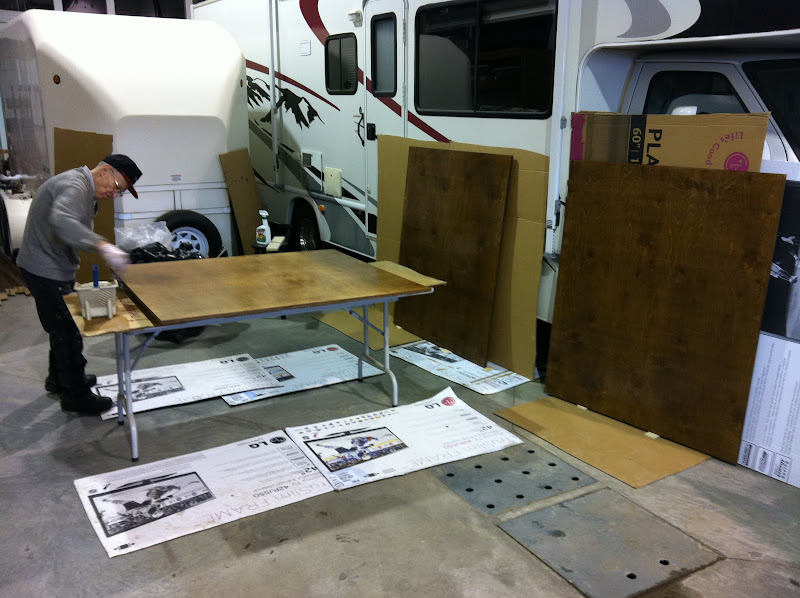 the back bar was removed and taken to Cloverdale Paint along with the Birch Plywood to be used by DJ’s Sound City to fabricate a false back wall for the new TV installation.  Cloverdale was able to customize a wood stain to match the existing color and Stan Serink then stained the custom-built wood back panels to match the color of the bar.

Once all the mill work pieces were cut and stained and ready to go it was back out to Westlock BP for the final installation of the new 60” Flat Panel TV’s. 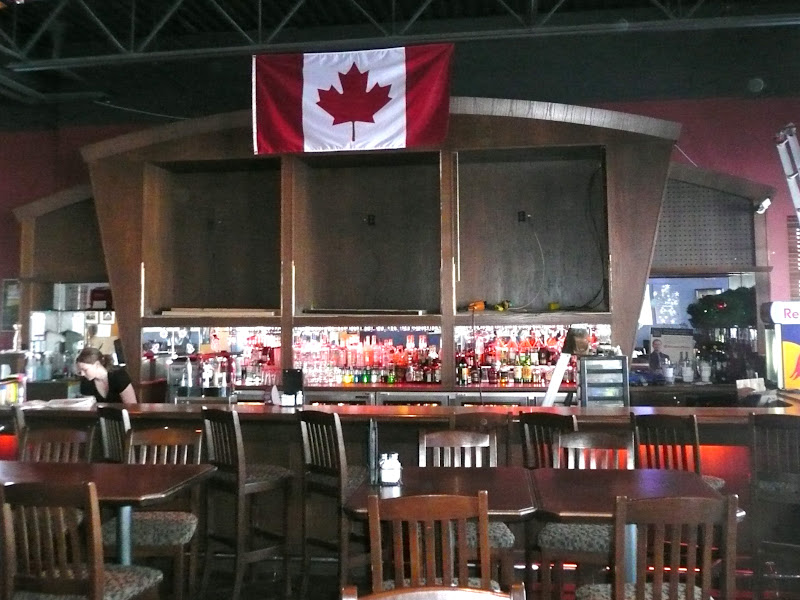 Before the new TV’s were installed the existing old, Toshiba 55” rear projection TV’s needed to be removed.  The old TV’s were over 250 pounds in weight each so DJ’s Sound City’s Genie Lift was needed for removal of the old sets.  Once the old TV’s were removed Doyle and Kevin went to work modifying the back bar and installing the framing for the false front wall.  At this time new, HDTV wiring was also ran into the back

bar and down to the satellite and AV equipment to provide HDTV picture quality on the new TV’s.  The wiring proved to be a challenge but after a few creative wire runs a patch to the AV equipment was finally achieved.  With the New HDTV Wiring in place and the framing complete it was now time to install the front wall backboard for the new TV’s.  Everything was pre-cut at DJ’s shop and luckily all the pieces fit like a glove.  The front walls went up, the wiring 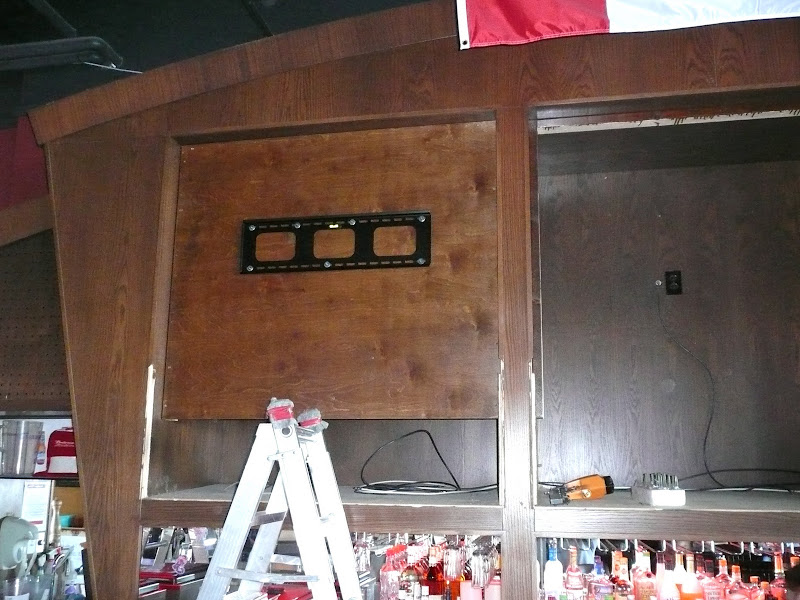 and electrical were run through the new backboards and then the New 60” LG Plasma TV’s were installed.

Once all three TV’s were install, connected, programmed and configured the existing front panel speaker cover wood pieces were reinstalled once again onto the back bar mill work and the installation was complete and looked excellent.  The new 60 inch Flat Panel TV’s almost filled the entire width of the TV pocket with less than 1 inch of wood backboard showing on each side of the TV.  The wood backboard did show above and below the TV and Cloverdale and Stan got the color to match beautifully with the existing bar mill work. 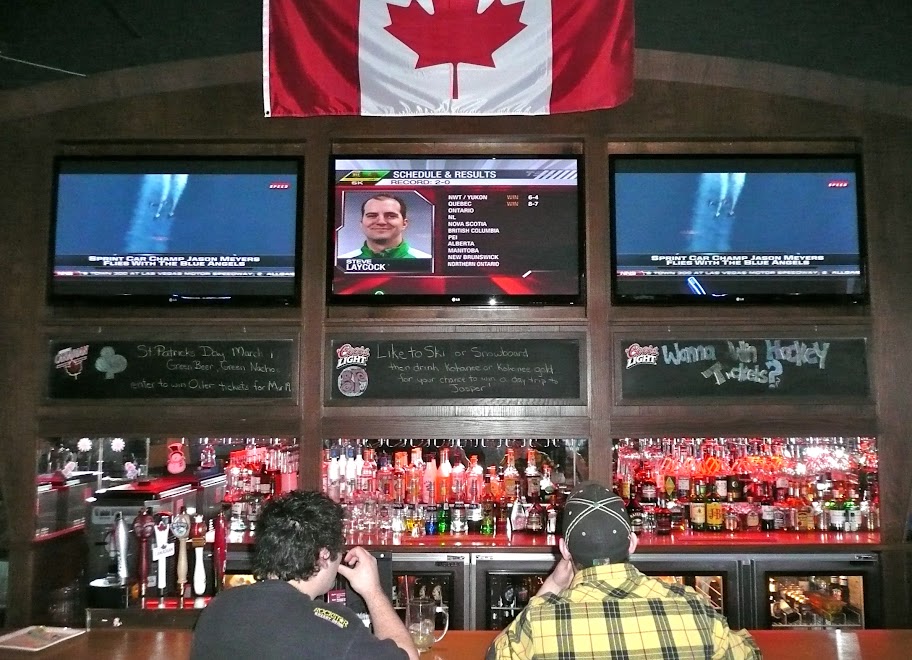 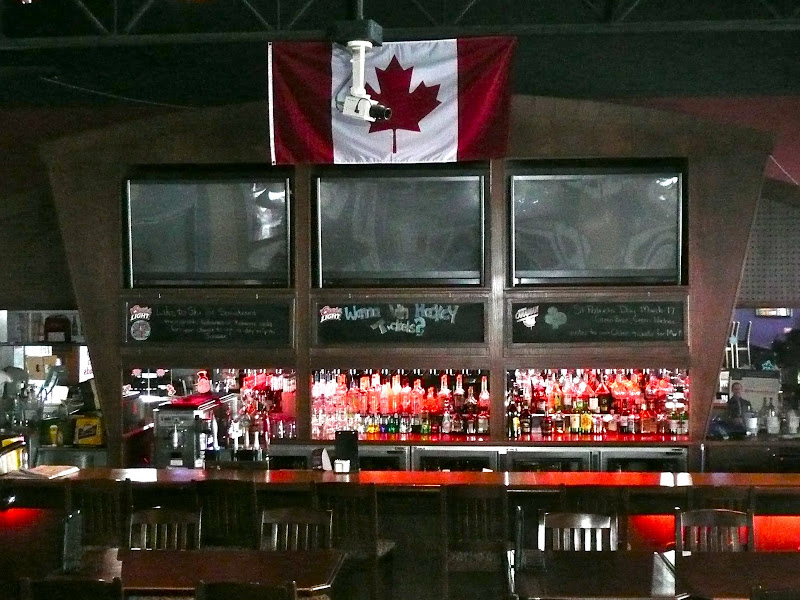 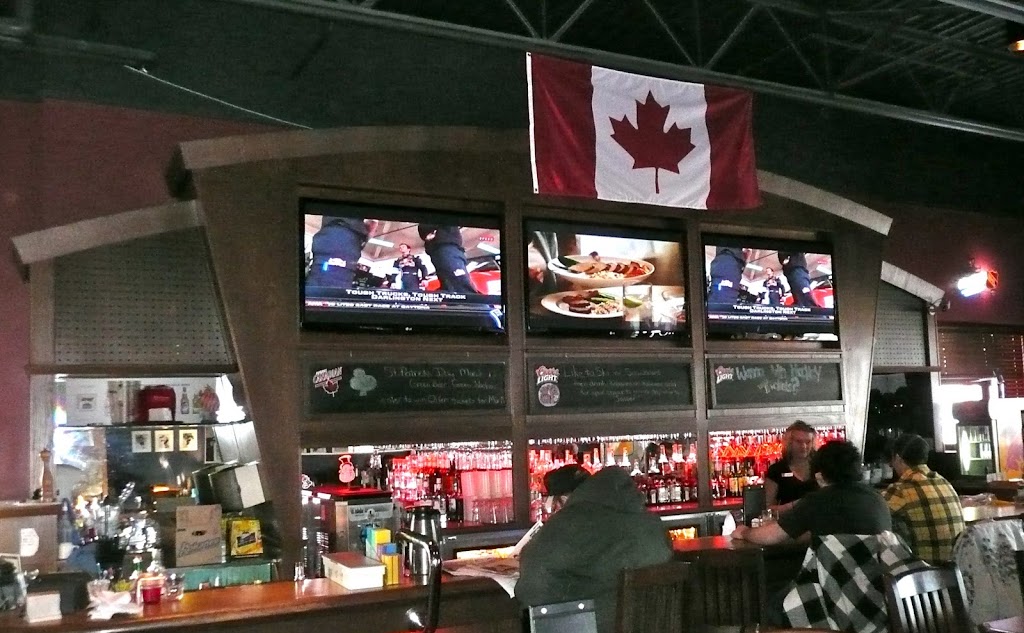 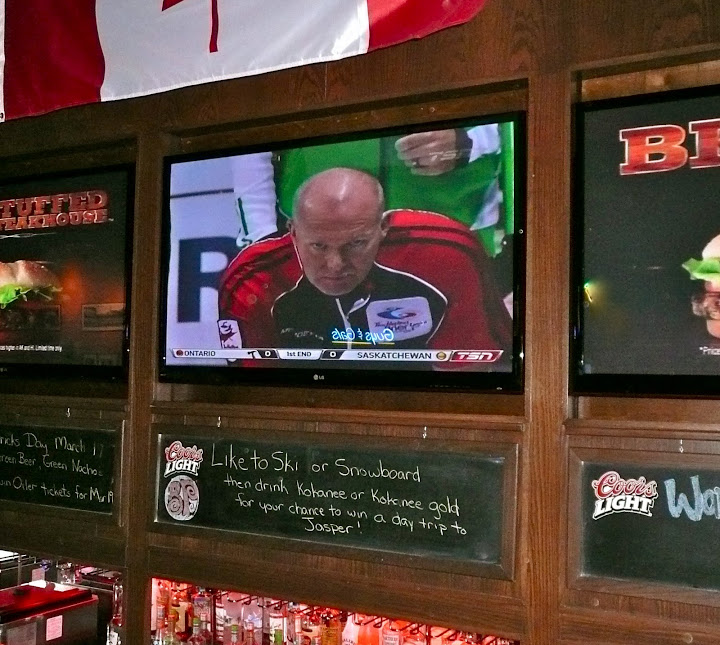 Now that all the new Flat Panel TV’s were installed and the HDTV picture quality was fine tuned and looked great, Doyle turned his attention to a couple of problems the location was having with it’s audio system – namely a buzzing in the restaurant and lack to clarity in both the restaurant and lounge.  It was determined that a couple of things were causing the audio problems including problems with the source equipment, wiring and a couple of bad inputs on the lounge amplifier.  To repair the sound problems a new Inter-M, 70Volt commercial PA amplifier was installed in the lounge.  The old DMX Music receiver was removed and both the lounge and restaurant audio inputs and outputs were rewired.  Lastly once complete the rooms were equalized for optimum sound.

The complete Audio/Video overhaul was completed in three site visits and the location stayed open and was fully operation during all the work including the back bar mill work construction.  The project was completed on-time and on budget.

Customer response and reaction since the AV upgrade has been very positive,  unlike a new pizza oven or convention cooktop, Televisions and sound are some of the very first things that customers notice when they enter an establishment.  They say that customers make form an opinion of a restaurant, lounge or bar within the first 30 seconds on entering the building, that’s before they’ve even seen a menu or tasted a bite of food.  While the food and service of a restaurant/lounge may ultimately be what keeps customers coming back,  the decor, ambiance and yes TV’s and electronics are some of the ques that customers use to make that all import first impression. 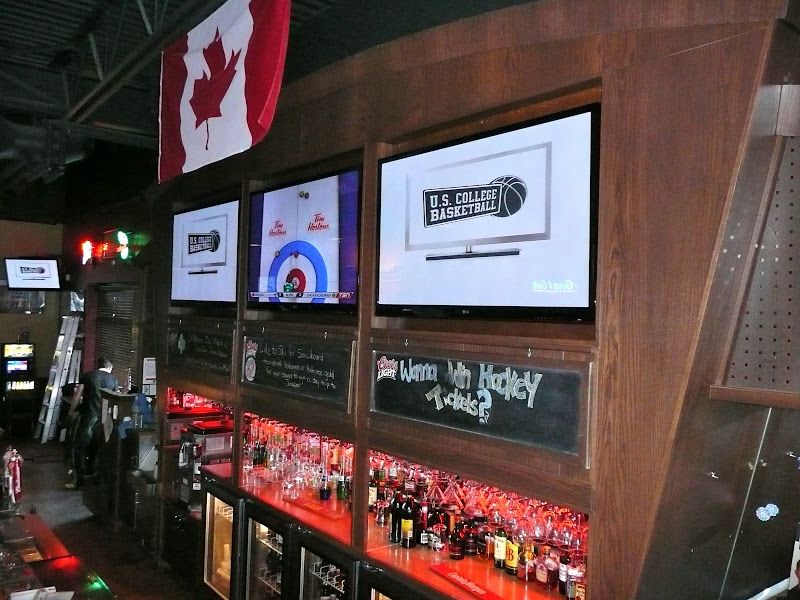 If your lounge, restaurant or bar still has old Tube Style CRT TV’s or it you’re looking to add HDTV or upgrade your televisions or sound system give the experts at DJ’s Sound City a call.  They have innovative, affordable designs and solutions for any project big or small.  DJ’s Sound City can be reached at 780-489-5522 or email at info@djsoundcity.com