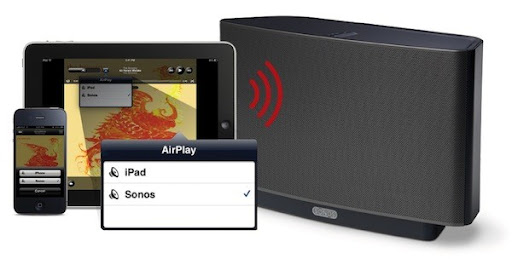 When Apple announced back on September 9th, last year that it would be working with BridgeCo to license it’s AirPlay technology to other electronics manufacturers similar to the Made for iPhone program we wondered what Sonos was going to do since it’s products were based on a similar but proprietary streaming technology.

BridgeCo announced Apple’s Airplay technology would be integrated into Denon, B&W, JBL, Pioneer and iHome components as “featured” Airplay partners but made no mention of Sonos.

Over the past nine months we’re seen “Made for Airplay”  certified products from Pioneer and Denon Receivers and B&W,  JBL and iHome speakers and docks but up until now nothing from Sonos.

On April 19, 2011 Sonos finally announce support or should we say a workaround for Apple’s AirPlay.  Sonos didn’t license Airplay technology or install BridgeCo chips sets into it’s already costly units rather Sonos decided to opt for an in-house solution by devising a link which will work with Apples own Air-Play compliant Airport Express router into Sonos’s proprietary wireless mesh network.

The solution is more of a $99 dollar patch rather than built-in support but will work for all Sonos current and legacy products. 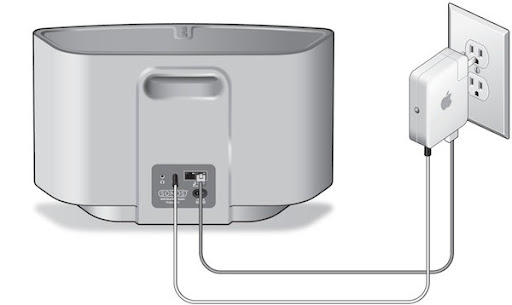 Does it work?  Yes kind of,  but unlike True AirPlay Support the Sonos work around does not support other AirPlay devices made by other manufacturers such as JBL, Pioneer, Denon or iHome.  Secondly the Sonos solution does not support AirPlay Video Streaming which is currently supported by Apple TV and certain to be coming to other AirPlay Certified Devices in the coming months.  Thirdly if you run a separate video and out from your device to stream your audio wirelessly via Airplay and hard wire the video direct the audio and video will not be in sync on the Sonos work around.  Lastly in order for the work around to function you need to update the software on all Sonos components to the latest Sonos software version 3.4.

While the Sonos AirPort work around is a good start and good news for current Sonos system owners we can’t image informed consumers purchasing new Sonos systems when they won’t fully support Apple’s AirPlay which clearly is poised to take over the market for wireless audio and video streaming in the months and years to come.
While we like Sonos and their components have been excellent products over the years however moving forward we cannot recommend purchasing new Sonos equipment and strongly recommend components with either integrated Apple Airplay support or open system options using Apple’s inexpensive AirPort Express routers.

Sonos’s work around solution may have bought them a little time for now however the final nail in the coffin will occur when Apple begins to offer integrated AirPlay support for HD Video and an inexpensive AirPort Express HD router with HDMI video out.  Once Airplay video supported products come to market the Expensive Audio Only Sonos systems will sadly become old, outdated and sadly obsolete.