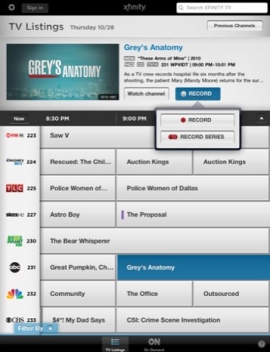 Time Warner another cable provider also unveiled an iPad App last November and it too allows Time Warner Cable subscribers to program their DVR remotely as well as watch and stream to the iDevice.  Direct TV and Dish Network in the USA also have similar Apps for their Satellite Receivers.

In Canada Telus TV and Bell TV both have iPad and iPhone Apps available to program and control their respective PVR receives as well as remote viewing apps leaving us to wonder What’s up with Shaw?

Shaw does have a remote streaming app to allow you to watch Shaw Programming on your iPad or Computer at an additional charge but they have yet to release an iPhone. iPad or internet app to allow remote programming of their Motorola DVR similar to Comcast.  Comcast and Shaw both use the same Motorola cable boxes so the technology exists, after all Comcast introduced their app more than 6 months ago so What’s taking Shaw so long?  Why are they dragging their heals on this?  The consumer demand is clearly there and both Shaw’s competitors Telus and Bell have iPad and iPhone apps.

Shaw is clearly behind the eight ball on this one and is at a competitive disadvantage compared to Bell and Telus with regard to this feature.  As a Shaw customer like many of you I don’t know why Shaw hasn’t released and internet, iPhone and iPad App yet for their cable boxes but Summer is usually the slow season for TV watching so one can only hope that Shaw will be introducing an iPad and iPhone app this fall to remotely control their DVR’s and cable boxes but then again I don’t understand why they haven’t enabled MOCA Enabled PVR Anywhere function on their DVR cable boxes either?

Here’s hoping they release both these features and soon!