Researchers Come Across a Potential Cure for Baldness

What’s an article about a cure for Baldness doing in a tech blog?  No -I haven’t turned the blog into an infomercial and No, you won’t be asked for your credit card after reading this post but this discovery is certainly technology related and potentially of interest to many readers.

Researchers at UCLA and Veterans Administration have inadvertently stumbled onto a potential new treatment for hair loss while conduction research on the affect of stress on gastrointestinal function.  The researchers believe they may have found a chemical compound that induces hair growth by blocking a stress-related hormone associated with hair loss.

It has long been recognized that stress plays a key role in hair loss and although there have been numerous products over the years claiming to regrow hair only the drug minoxidil has been proven to regrow hair and with widely mixed results.  The UCLA-led team of researchers say their findings show that a chemical compound they have discovered could provide long-term hair regrowth with minimal short-term treatment.

In their controlled test UCLA researchers used genetically altered mice which overproduce a stress hormone called corticotrophin-releasing factor or CRF for short.  As these CRF mice age they lose hair and eventually become bald on their backs making them very easy to sport from their healthy, hairy counterparts. 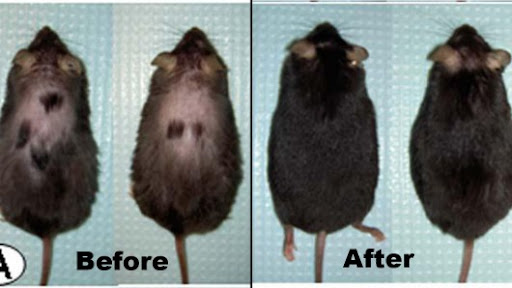 UCLA and VA researchers injected the CRF mice with a peptide called astressin-B which has the ability to block out CRF and observed the affect on gastrointestinal tract function of the mice.  The initial single stage injection had no affect on the CRF mice so researchers continued injecting the mice daily for five days and observing the results. Once the five day treatment concluded the researchers measured the effects of the astressin-B on the colons of the mice and then returned the bald mice back into the cages with the healthy hairy mice. 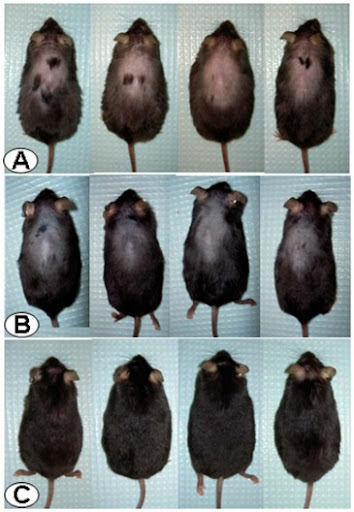 Three months later researchers returned back to conduct further gastrointestinal tests on the mice and noticed a very unexpected side effect – the bald CRF mice had regrown their hair back and were virtually indistinguishable from their unaltered hairy brothers.

Million Mulugeta, an adjunct professor of medicine in the division of digestive diseases at the David Geffen School of Medicine at UCLA said “When we analyzed the identification number of the mice that had grown hair we found that, indeed, the astressin-B peptide was responsible for the remarkable hair growth in the bald mice,” further “Subsequent studies confirmed this unequivocally,” he added.

It appears from the findings that 5 injections of astressin-B over a period of 5 consecutive days was enough dosage to achieve hair regrowth in mice up to a period of four months.

Like many discoveries in medical researcher the side effects from one treatment lead to new discoveries and treatments for other conditions.  Whether astressin-B will be a proven to regrow hair in humans remains to be tested and proven however the fact that bald mice previously responded positively to treatment from minoxidil when researching Rogaine suggests that similar results may in fact be observed with astressin-B in humans.

UCLA and the Salk Institute have applied for a patent on the use of the astressin-B peptide for human hair growth and new research is already taking place.

2 Responses to Researchers Come Across a Potential Cure for Baldness