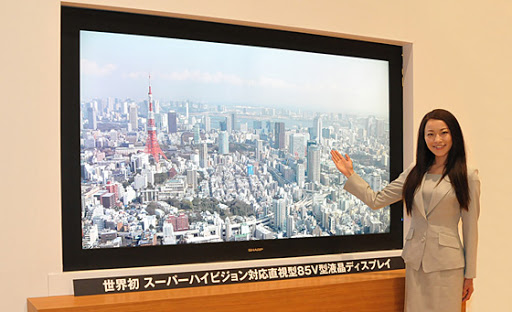 If  you thought 1080P was it, the end – think again – Panasonic and Sharp both manufacture Ultra High Definition Displays with resolutions 4-16x greater than 1080P.

Remember when you bought your first 720p HDTV flat panel TV,  10 years ago thinking Yeah this is the best!  That first TV had only composite, component, s-video and VGA inputs.  Then a couple years later DVI inputs and increased resolution to 1080i was introduced and in another year or two HDMI and 1080P was added and you thought WOW – 1080P now that’s what I call HDTV.  So you forked out a few thousand dollars on a new display and  blu-ray player only to find out that 3D TV is now available, and then passive 3D and soon No Glasses 3D all with 1080P as the maximum resolution – That’s the best right! – wrong.

Not to be out done Sharp recently displayed (May 2011) an 85” UHDTV LCD Flat Panel display with a resolution 16 times greater than today’s current 1080P HDTV.  Sharp anticipates Ultra High Definition Displays to appear 8-10 years from now.

The moral of the story is if you thought 1080P was it – think again.  Odds are in the next 10 years will see Glasses Free HDTV and toward the later part of the decade higher Ultra High Definition Displays.  Of course this also means that those 1080P blu-ray DVD’s will also go the way of VHS as new media most likely in the form of direct streaming will appear – of course with a 16 fold increase in resolution will also come a 16x increase in bandwidth therefore bandwidth will need to increase in order for our display resolution to improve greater than 1080p.

As you can see by the numbers 1080P has twice the resolution of 720 while 4K HDTV is 4 times greater than 1080P and 8K UHDTV is 16 times greater than current 1080P HDTV.  It should be noted of course that there is no programming greater than 1080P  available today making these Ultra High Definition Displays rather useless from a consumer point of view other than to shine a light on the future and what may be.