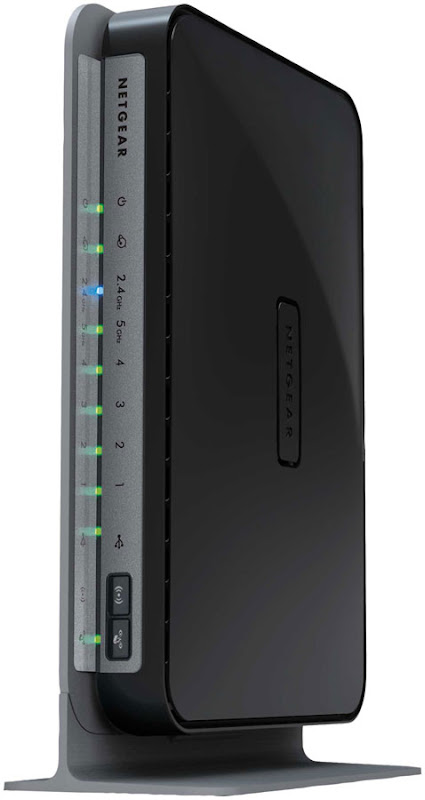 The N750, WNDR4000 is Netgear’s newest Wireless Dual Band router with blazing fast performance.  Let me begin by saying I’ve been using the previous model N600 WNDR3700 for over a year now with terrific performance and reliability.    When Netgear announced their new N750 (WNDR4000) at CES2011, I couldn’t wait to get my hands on one and check it out.

Set Up:
Like all Netgear routers step up is a breeze thanks to Netgear’s quick and easy, color-coded 1-2-3 setup process.  Whether you’re a novice or pro you will have this router up and running in a matter of minutes.

Set up and customizing the Netgear WNDR4000 can be done either with the supplied software CD Rom or manually through your web browser by logging into the routers setup menu.  Since the CD-Rom may not work with all operating systems we recommend you use the manual log in method and familiarize yourself with this set up and configuration since this method will be used throughout the life of your router to make adjustments, configuration settings, usage monitoring and firmware updates.

Netgear’s setup menu is well laid out, intuitive and easy to navigate.  The setup and configuration page is broken up into three columns,  a list of feature sets on the left panel, a list of option choices for each feature set on the center panel and the right panel displays short explanations on what the features and options mean.  All information is written in Nontechnical, easy to understand language.

Features:
Spec wise the WNDR4000  uses the latest Intel 6300 chip set and is the fastest dual band wireless router on the market today , Netgear claims the N750 will do 450Mbps on the 5GHz band and 300Mbps on the 2.4GHz band.  While those numbers sound impressive in real world conditions, wireless routers rarely reach the speeds touted by their manufacturers.

While the WNDR4000 never reached 450Mbps in our test,  it did top out at 282 Mbps on 5GHz band which is steller performance and the only thing to come close is Netgear’s other high end dual band router the WNDR3700 and Cisco Linksys’ new E4200 router.  Average speeds on the 5GHz band were around 170 Mbps.  Throughput in the 2.4GHz band also was lower than the rated spec at only 112 Mbps mainly due to network congestion in our area.  Netgear employs a “Good Neighbor” protocol which limits the routers speed to 144Mbps when other 2.4GHz wireless networks are detected in the area.  Average speed for the 2.4GHz band was around 50Mbps.  It’s likely that the router would have performed better in the 2.4 band if there were no other wireless networks in the vicinity.

The WNDR4000 shares it’s styling with the WNDR3700 and is sleek and stylish and looking great on the desktop, wall or in the equipment room.

4 Networks in 1:
With the WNDR4000 dual band router however you can actually set up four (4) discrete  networks using this one router.  The router allows you to set up one network for each of the dual bands as well as one guest network for each of the dual bands for a total of four networks.  Your guest networks can be configured differently to limit guest access to other computers or peripherals on the network such as printers, hard drives etc…   Each network can have a different name, password and privileges.  While this may sound difficult to set up, Netgear’s intuitive set up page actually makes it fairly straight forward and easy.

4 Wired Gigabit Ports:
The back of the router contains 1 – WAN port for connection to your Modem, 4 hard wired gigabit ports for wired devices and one USB port which  can be used with an external hard drive to turn the router into a network attached storage (NAS) device.

Network Attached Storage Ability:
The router supports any hard drive formatted in NTFS or Fat32.  The USB port can also provide bus power to compact USB hard drives.  For file sharing the WNDR4000 supports the Windows SMB protocol with allows any computer in the network to access the connected USB hard drive using a network browser (Firefox, IE) without addition software installed.  Access to the hard drive can be password protected and restricted for read and write privileges.   The NAS feature can also be configured to work with DLNA-enabled streaming devices such as Xbox 360, Playstation, DVD players, Netflix Boxes and TV’s and receivers with DNLA built in.  When enabled the DNLA devices automatically search NAS drives for digital content making it available within the network.  The external connect hard drive can also be configured as an FTP or +HTTP server and accessed remotely over the internet.  This takes a little more work to set up and requires a dynamic DNS service such as Dyndns.org unless your internet connection has a static IP address.  It should be noted that throughput to the connected USB deveice is very slow with an average speed of only 5Mbps.  While the connected USB Hard Drive did work OK for streaming media at 4-8Mbps there were a couple pauses and drop outs during my test.  If you require faster speeds from a NAS device you may wish to purchase a dedicated NAS or Media Server such as Iomega’s Home Media Network Drive,  HP Media Smart Server or Synology all of which have read and write times 3-9 times faster than connecting a USB drive to the Netgear WNDR4000.  It should be noted these other aforementioned units are dedicated NAS only units and are not routers.

Traffic Meter:
The Netgear WNDR4000 has a built in traffic meter which will allow you to monitor and control the routers bandwidth which is useful if you have a limited bandwidth quota and don’t want to go over.    You can set the router to disconnect from the internet if a certain amount of data has been used over a period of time (up loaded or down loaded).  The traffic meter won’t allow you to restrict individual computers on the network but is applied to every device connected so you can’t use this feature to restrict one user from downloading to much.

Security, Parental Controls & Port Forwarding:
Like all Netgear routers the WNDR4000 supports the latest wireless-encryption methods, WPA and WPA2, however dropped from it’s security settings is the older WEP password protection, so if you need to connect legacy wireless devices then the WNDR3700 is a better choice since it still offers WEP security.  The WNDR supports content filtering to allow you to block certain Web Sites or services and port forwarding which is essential in our business for remote viewing of CCTV camera’s, DVR’s and alarm monitoring.

Summary:
Because the Netgear N750 WNDR4000 just came out last month, I haven’t  installed many of these yet however I have installed several Netgear N600 WNDR3700 routers as well as other Netgear models and my experience with Netgear has been very positive one to date.  So far out of all the Netgear routers I’ve installed, I’ve only had one bad one.

In summary the Netgear N700 WNDR4000 dual band wireless router is a sleek and stylish, reliable router that’s easy to set up and provides great performance on both the 5GHz and 2.4Ghz bands.  While most home users may not require all the features and options of the WNDR4000, heavy users and commercial users will appreciate the WNDR4000’s rich feature set which includes USB jack, 4 hard wired gigabit ethernet ports, DNLA support, parental controls, traffic meter and controls plus much more.

The WNDR4000 does not support WEP encryption protocals only WPA, WPA2 and above so if you are planning to use this router with legacy devices and require WEP then the WNDR3700 would be a better choice.

Speaking of the WNDR3700 according to SmallNetBuilder.com “If you’re trying to decide whether the WNDR4000 is a step up from the WNDR3700v2, it’s not. In 2.4 GHz, both seem evenly matched for strong to medium signal strength.”  PC Magazine also raves about the previous model WNDR3700 calling it “the best of the best”  scoring it 9 out of 10 and giving it a “Kick Ass Award”.

Personally I too found little or no difference between the older WNDR3700 and the New WNDR4000 they both performed equally well in my home and office networks.  If you need the very fastest 5GHz bandwidth performance available today, I would give the WNDR4000 a slight edge over the WNDR3700 and for the slight difference in money (an additional $20-$30 dollars) the WNDR4000 is good value if you need increased N performance but otherwise both the N600 WNDR3700 and N700 WNDR4000 are equally impressive.  Both the Netgear N600 WNDR3700 and new N700 WNDR4000 wireless dual band routers have earned PC Magazines coveted Editors’ Choice Award.

Other Considerations:
Another dual band N Speed router worthy of consideration is the new Cisco Linksys E4200 which is essentially a cousin under the hood to the WNDR4000 with 16MB of flash as opposed to Netgear’s 8MBs.  Essentially these two routers are very similar with the Netgear WNDR4000 edging out the Cisco E4200 on N Band performance while the E4200 has a slight edge over the WNDR4000 in the 2.4GHz band range.

It should be noted that both these differences are slight and essentially Netgear and Cisco Linksys are really neck and neck in performance may vary one way or another depending on your location and network environment.  I personally prefer the Netgear’s quick and easy setup over the Cisco but that’s strictly a personal preference and not performance related which is why Netgear is always my first choice.

Important Note for Shaw Cable Users & Netgear Routers:
If you are using a Netgear router with Shaw Cable as your ISP in Alberta or BC, you will need to change your incoming and outgoing mail server names from “shawmail” to “shawmail.ed.shawcable.net” in order for your email to work.