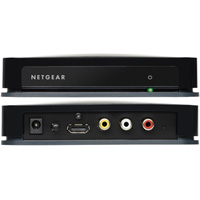 Early this year Netgear was first to market with their PTV1000 Push2TV WiDi adapter which met with mixed reviews and now Belkin and D-Link have entered into the wireless video streaming WiDi market with their product offerings.  Details on Belkin’s ScreenCast TV WiDi are sketchy at the moment since it hasn’t officially released their adapter yet but D-Link has released and is now shipping their WiDi 2.0 MainStage video streaming adapter.

The D-Link MainStage works only with WiDi enabled laptops and tablets which up until now have been rather scarce.  Most new laptops and some tablets are now shipping with WiDi built in and the product offerings continue to increase.  The D-Link MainStage will stream up to 1080P video and 5.1 surround sound from your WiDi enabled device to your Plasma, LCD or Projection TV from 33 feet away while still allowing you to multi task using other programs on your laptop.    Outputs on the D-Link WiDi adapter include HDMI, composite video, SPIF audio and analog RCA audio outputs.

The D-Link MainStage is available now in the USA for $129.99 and will be coming to Canada mid July.

For comparison the Netgear PTV1000 Push2TV WiDi adapter offers similar features to the D-Link and is currently selling for $79.99 while the Apple TV using Airplay Technology is still the rock solid standard for video streaming with a retail price of $99 in USA and $119 in Canada.

As more WiDi Windows 7 computers enter the market look for more WiDi adapters to be available including the Belkin ScreenCast TV which should released soon.