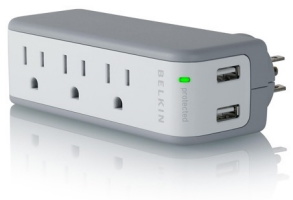 The Belkin Mini Surge comes equipped with three (3) AC and two (2) USB power outlets all packed into a compact surge protector.  The two USB outlets are for charging only (not data transfer) an carry a 5V, 500mA rating at each outlet.  All 5 outlets are surge protected and rated at 918 Joules of energy dissipation, with a 36,000A Maximum current spike and a continuous duty rating of 1,875 watts of power.  The power plug is located on one end of the surge protector and rotates 360 degrees with four locking positions so it will work with almost any AC outlet.

Belkin calls this unit Mini because it’s smaller than traditional surge power bars however at 5” inches long, 1.5” inches tall and 2.5” inches thick compact may be a more appropriate word to describe this surger protector since it’s certainly larger than most would assume simply by looking at the picture.

The AC outlets on the surge protector generally work great and are spaced out far enough apart to allow the usage of all three AC plugs for most power cables and cords.  Wider AC cables or AC power adapters may take up more than one slot in which case the Belkin Mini Surge Protector then would become in effect a two outlet AC power bar. 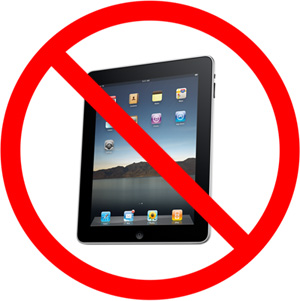 The built in USB power ports are convenient however at only 500mA per outlet they are not powerful enough to charge a single iPad or  even two (2) iPhones if plugged into the USB ports at the same time.  The USB power ports will charge a single iPhone however when two (2) iPhones are plugged into the USB ports or a single iPad is plugged into a single USB port a charging error message appears on the iPad or iPhones display.  Since my wife and I both have iPhones and share an iPad the convenience of the Belkin Mini Surge Protector was minimal since we still had to carry additional USB Power cube chargers for the iPad and extra iPhone and then plug them into the AC Outlets instead of the USB ports of the Belkin Mini Surge Protector.  So while on the surface the built in USB ports are a great idea, in acutal use they are under powered and are of marginal benefit when charging more than one low powered device and absolutely useless when charging a high powered USB device like an iPad.

The 360 degree rotating power plug is a great feature however retractable power prongs would be an added benefit.  Belkin does include a plastic prong cover which does double duty covering the prongs and preventing them from scratching other objects in your laptop bag and secondly helping to balance and stabilize the Mini Surge protector by inserting the prong cover into a small notch on the bottom of the housing.

Belkin’s list price on this Mini Surge Protector is $24.99 but we’ve seen it as low as $14 dollars so check around and get yourself a deal. 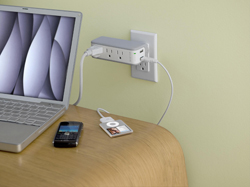 We like the fairly small size of the Belkin Mini Surge Protector as well as the three AC outlets, rotating power plug and serious surge protection.  We didn’t like the low powered USB ports and lack of retractable power prongs.  Overall we’d give the Belkin Mini Surge Protector a 4 out of 5 and hope they increase the USB power output enough to charge an iPad and redesign the power prongs to be retractable or foldable on the next model of this surge protector power bar.