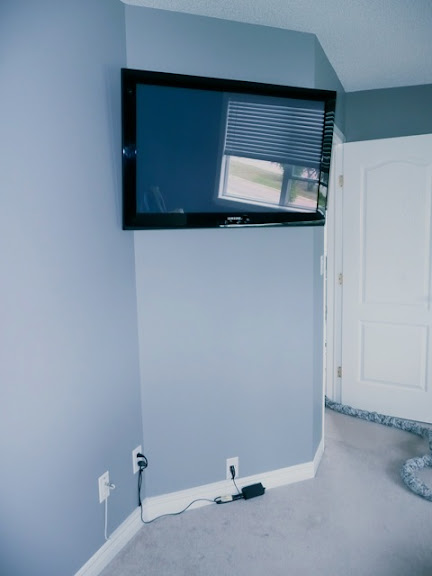 When home owners Darren and Lisa Miller wanted to mount a 42” inch flat panel TV on their angled bedroom wall they were faced with several installation challenges and called Doyle at DJ’s Sound City to see what tricks he could perform to mount the TV on the wall without it sticking out past the corner.

First Doyle came out to the Miller’s home to do a site survey.  Turns out they were just completing some renovations and Telus was coming back to complete the programming and activate the Optik TV receivers in two days so Darren wanted the TV installed in the bedroom before the Telus came back. 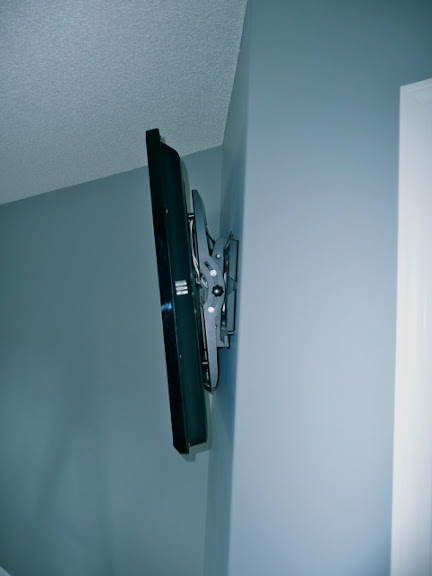 The wall in the master bedroom was angled 135 degrees from the adjoining wall and the flat portion of the wall where the TV was to be mounted was only 37” inches wide while the 42” Samsung TV they wanted to install was 42.5” wide.  Darren and Lisa didn’t want the corner of the TV to overhand the edge of the wall and wanted the TV to fit as close to the wall as possible.

Doyle immediately identified two options for mounting the TV, an articulating flat panel mount would work however it would be heavy and require cutting the drywall, installing extra backing inside the wall, then patching the wall and repainting before mounting the articulating wall mount. 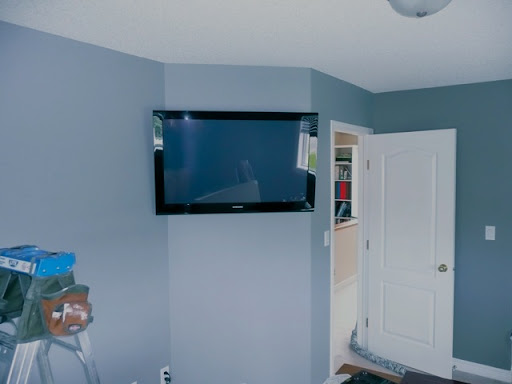 Doyle had a second and better option.  Using a standard flat wall mount bracket mounted on the 37” portion of the wall and then placing 3/4” – 1.5” shims behind the Flat Panel TV hangers, Doyle could angle the Samsung TV enough to move it toward the inside corner of the wall enough to bring the right edge of the TV in line with the corner of the wall.  This method would allow the TV to be mounted only 3.5” from the wall on the right side and 4.75” from the wall on the inside corner.  The additional space behind the left side of the TV would also make a perfect place to install the Telus Optik TV HDTV Receiver.  Looking at the wall Doyle decided to mount the Samsung TV at the same height as the door jamb to maintain the same sight lines with the door. 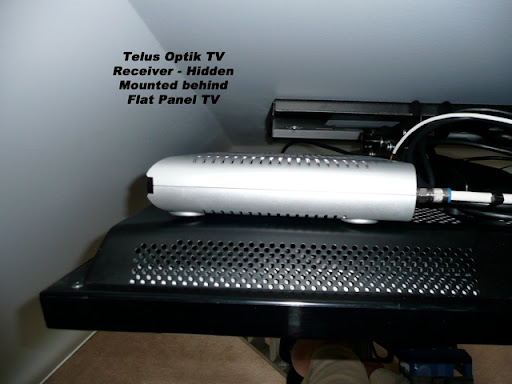 First the hangers were mounted onto the back of the Samsung TV and then measurements were taken for the wall mount to determine the proper mounting height.  The wall mount back bracket was then attached to the wall and then cutouts for low voltage cable wall plates were installed.  A special cabling wall plate was installed behind the TV bracket to allow low voltage power for the Telus TV box to be ran in addition to the power for the HD and coaxial cable feed.  All wires were feed down the wall and a second multiple cable wall plate was installed just above the baseboard to provide cable access into the wall cavity.  5/8” plastic wire duct track was then installed above the baseboard to conceal the power and coaxial cable and then the cables were ran to their respective outlets.  The Telus TV power supply was ran outside the wire duct to allow for easy access for servicing if required.  A small armoire  was going to be placed in front of the wall below the TV which would hide the wall plate and Telus TV power supply. 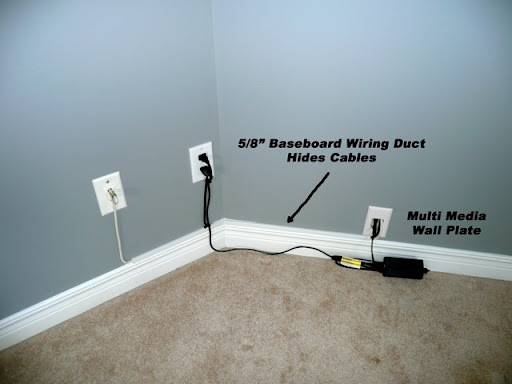 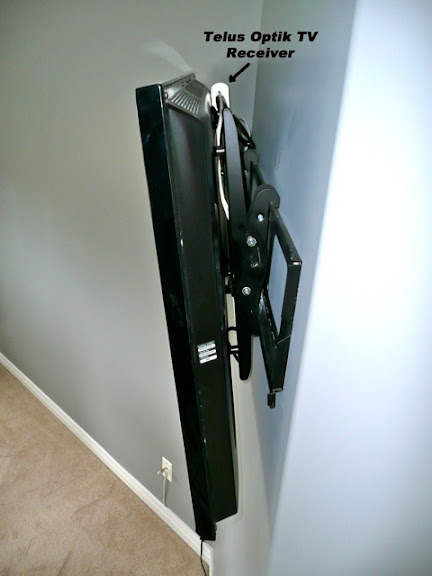 The infrared remote signals easily passed through the sides of the Samsung TV to provide control of the Telus TV box.

Mike from Telus completed the activation and programming of the Telus TV and the end result was a very neat and clean installation of a 42” wall mounted Samsung Plasma TV with no wires or equipment showing.

If you are planning a renovation or would like assistance mounting your flat panel TV or audio, video, computer or security wiring call Doyle at DJ’s Sound City at info@djssoundcity.com or 780-489-5522, for a Free, No Obligation Consultation.