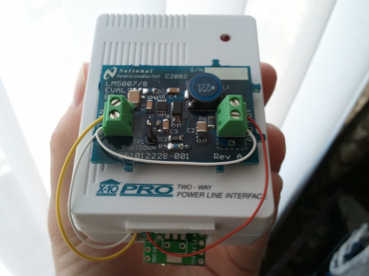 Two computer researchers at this years DefCon Hacking Conference in Las Vegas demonstrated an X10 jammer which can be used to Hack Into home automation systems which run through power lines using the antiquated X10 protocol.

According to Wired.com the hackers showed how they can gain access to an X10 based automation, alarm and security camera system using a specially made sniffer device, an internet connection and an electrical outlet.              Photo by David Kennedy & Rob Simon

The hackers manipulated lights, thermostats, security cameras and even turned on and off alarm systems via their specially made sniffer device and broadband connection in 15 different homes.  In addition to gaining control over the X10 systems the hackers could just sit and watch and observe the movements of home owners in their houses as they moved from room to room via motion sensors and X10 cameras.

Referring to X10 Dave Kennedy, one of the hackers said “None of the manufacturers have implemented really any security whatsoever on these devices, ….  it’s such an immature technology”.   In fairness the X10 protocol was originally developed thirty years ago in the 1970’s at a time when internet and broadband where not publicly available and security protocols were never deemed necessary at the time.

The hackers spent two months researching and designing their device using open source tools.  The hackers focused on X10 systems because it was an easy target since it does not support any type of encryption.  The hackers were also able to hack into a Z-wave device which did not have the AES encryption properly set up.

The X10 hacking device is being release to the public as the X10 Sniffer and the X10 Blackout which jams X10 signals and interferes with the proper operation of X10 modules, cameras and alarms.

Tip – Warning:  If you have an X10 based Security System, Cameras or X10 home automation modules STOP! Using them Immediately and consider them to be unsafe and unsecure.  The X10 Sniffer and Blackout Modules are readily available for sale on the internet and it’s only a matter of time till a burglar in your area gets a hold of one.

X10 Devices, Alarm Systems and Cameras are still being sold over the internet and and some electronics stores at heavy discounts mostly to Do-It-Yourselfer’s or home owners looking to say a buck on a home security, integration or video camera system.  If you recently purchased an X10 device, alarm or camera system and can return it to the store for a refund – Do so immediately.  If you are using an X10 alarm, security camera system or other X10 devices be aware these devices are NOT Secure and can be taken over easily by a hacker and your camera’s can be viewed without your knowledge.

ION Security is a leader in secure affordable Home Automation, Home Integration, Alarm Systems and Video Camera Monitoring Solutions.  If you currently have an X10 based system and have questions or concerns call Doyle at 780-489-5522 or email info@ionsecuritysystems.com.