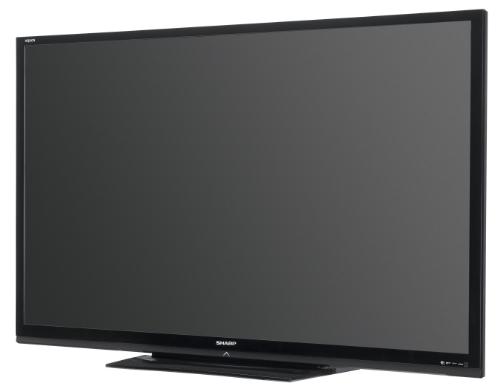 Just in time for the start of the NHL Hockey Season, the World Series and NFL football, Sharp announced their new LC-80LE632U, 80 inch LCD HDTV which is available this month at electronics retailers across the continent.

You may recall Sharp advertising their stunning 70 – inch AQUOS LCD HDTV during the NHL Hockey Playoffs only four months ago which quickly became a best seller based on performance, picture size and price.  I recently installed three Sharp Aquos 70″ LCD TV’s and everyone who sees them is spellbound by the picture size and resolution.

The new Sharp LC-80LE632U isn’t a Quattron 4 Color panel but does include full LED backlighting, 120HZ motion processing and built in Wi-Fi.  The extra large panel is a full 10 inches larger than Sharp’s 70 inch model and 20-25 inches larger than 55 – 60 inch flat panels.

The new Sharp 80-inch LC-80LE6632U is available today with a MSRP of $5999 in Canada but you can find it for less on the street.  Some US retailers are already selling it for under $5k.  If you want a Huge Flat Panel but $5 grand is too much check out Sharp’s 70 inch models in 120Hz and 240Hz refresh rates, since the introduction of the 80″ Sharp model pricing on the 70 inch models has dropped 15-20 percent. As mentioned we’ve installed several Sharp 70″ panels in both 120Hz and 240Hz models and all our customers have had nothing but favorable things to say about the 70″ Sharp Aquos Quattron HDTV’s – the 80″ Aquos looks equally impressive.

If you’re planning on building or renovating your home or business and require audio, video, security cameras or alarm systems give Doyle at Ion Security a call at 780-489-5522 or email info@ionsecuritysystems.com.