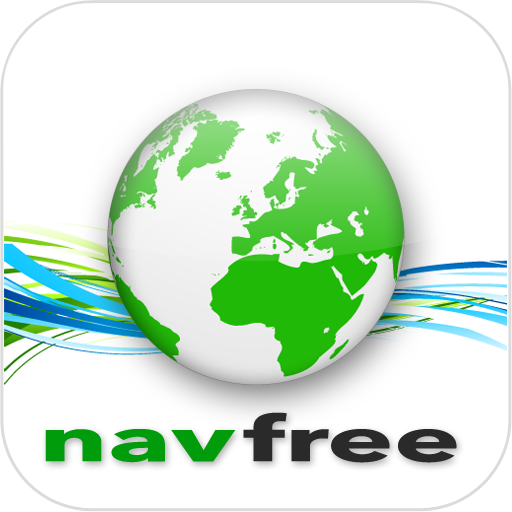 Navfree GPS Live Canada is a touted is a completely free GPS navigation app with no additional monthly charges providing voice guidance and turn by turn directions. According to Navfree the map data used is created by thousands of users around the world and as the community of users grows so does the quality of the map data.

So how good is it?

I live in Edmonton, Alberta and have been using the Free Version of Navfree GPS Live Canada for a couple weeks now.  The App is available for both the iPhone and iPad, my evaluation was conducted using my iPhone 4 although I did try it on my iPad 2 which also worked fine. 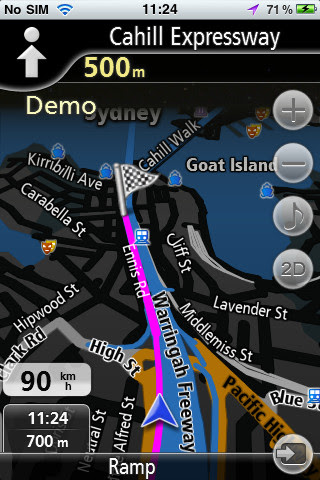 The Navfree user interface looks outstanding and is absolutely first rate, comparable to Garmin and TomTom dedicated units and apps. The map view features both 2D and 3D viewing options and has simple intuitive controls for zooming in and out and a button to access your iTunes music without exiting the app.  The bottom left corner of the screen shows  distance and speed while the top information bar shows the distance to the next turn.  Graphics are well done and the screen changes automatically from day to night mode to reduce glare for night driving.

The input screen is thoughtfully laid out with nine large button icons for Navigate, Find, Google Search, My Route, Send Location, upgrades, Home, Preferences and Back to Map Buttons.

Entering a street address into NavFree either from your contact list or manually often also results in the error message “Cannot Find Route”.  This too is odd since most of the destinations are normal municipal addresses – nothing special which made me question the usability of this GPS app.

While Navfree has a tough time with manually entered addresses or data from your contacts list is fairs much better with address information obtained from Google or Bing search.  I find both interesting and odd.  Enter the address in manually or by address book and more than 30% of the time Navfree returns the error message “Cannot Find Route”.  Enter it via Google Search and  Navfree is able to calculate a route – go figure?

Google Search is built right into Navfree which makes entering addresses via Google simple and easy although not all addresses are available by Google search. 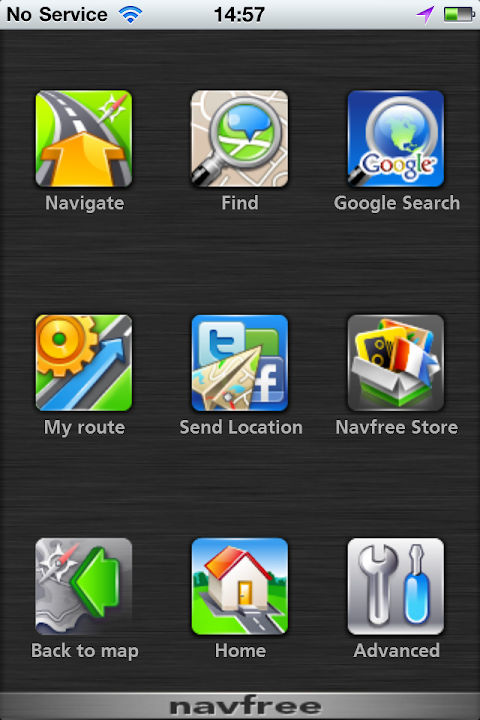 Another observation while using Navfree is that even when you enter a street address the search algorithm seems to want to find locations based on postal codes?   When you enter a street address or location you often get a list of postal codes to select from.  Even when Navfree can find a location by street address or postal code it still has a hard time navigating a route.  Once again this is odd since the Map on NavFree can display our current and final destination locations however for some reason  it can’t figure out a way to get there … Why?                  My best guess is that Navfree uses Google Map location data to pinpoint locations on the Navfree map and then uses OpenStreetMap data to navigate to the destination.

Unfortunately while Google can pin point the GPS coordinates of where the location is – Open Street Map data does not have enough information in it’s data base to provide route navigation to the final destination therefore you get the Cannot find Route Error message appears rendering Navfree useless as a Navigation aid and basically a novelty.

There are many features I like in the NavFree app.   The seamless integration of Google Search, the turn by turn voice instructions and the Send Location feature which sends an email, facebook, tweet or text sms message with a location map and default subject phrase saying “Come Find Me” are all well done.

NavFree is a Free add based GPS app with the option of paying $1.99 for an ad free version.  The ads on Navfree are fairly limited and to be honest with you don’t interfere with the on screen navigation or map view all that much.  $1.99 is certainly cheap for an ad free GPS app if it worked,  however the paid app only eliminates the ad banner and doesn’t unlock or add any further route information which is the biggest limitation to the Navfree app.

Voices – Languages:  The standard voices are English UK – Dave and English UK Kate along with French – Julie.  Additional languages are optional and can be downloaded Free of Charge.  I added English US voices Alyson and Ed for my demo and preferred the US voices to the UK ones.

Operation:
I found the learning curve for Navfree to be quick and easy.  Input and navigation was more intuitive and easier to use than the factory Navigation unit in my Honda Ridgeline.  The map graphics are very good, especially for a Free App and the routing calculations are much quicker than the factory navigation unit in my truck when NavFree was able to compute a route.  Like most modern navigation systems the Navfree has automatic rerouting so if you miss a turn or deviate from the suggested route Navfree adjusts and provides you with an amended route automatically.

Hands on Experience:
The maps on the Navfree were more accurate and up to date then the maps on my factory Honda Navigation unit (which were 2 years old),  My Garmin handheld which was recently downloaded with new maps only 6 months ago still was missing some roadways that were included on the Navfree GPS App.  The Navfree GPS seemed to mirror the information on Google Maps which was the most up to date. 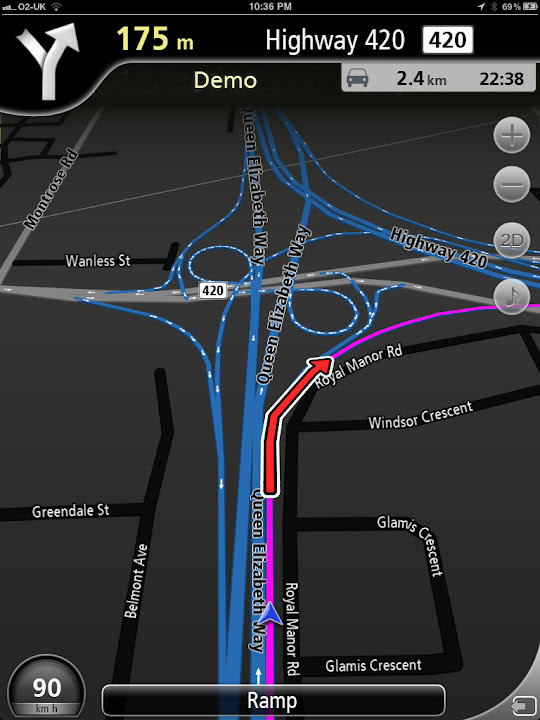 While the maps on the Navfree are good and mostly up to date, the accuracy of the navigation and guidance was less so.  The downfall of the Navfree  comes when searching for addresses or navigating to destinations.  I don’t know the algorithm Navfree uses to calculate routes but in metro Edmonton it often runs into problems and cannot calculate routes to normal metro street locations.  When Navfree does calculate a route it often calculates a much longer route using only a limited number of common roadway.

During my test Navfree couldn’t map out at least 25-30% of the destinations I programmed into it.

The factory GPS in my Honda truck and Pioneer and Garmin units were all able to provide route info and navigation to all the addresses I used during the test.  The routes computed by the Garmin and Honda GPS units also provided the shortest and fastest routes, compared to the ones suggested by Navfree.

Cost:  It goes without saying that the cost of Navfree is ZERO! while the cost of the GPS units I compared to Navfree ranged from $350 all the way up to $2600.  Garmin, TomTom and Magellan also offer iPhone GPS apps which cost $30-$50 dollars and ALL these options provide better, more accurate and reliable navigation and routing information than Navfree albeit at a higher cost.

Summary:
Overall I can’t help but be impressed by the LOOK of the Navfree GPS Live Canada App.  On the surface this app looks sleek and polished however the functionality of the navigation routing is not equal to the user interface.

The primary purpose of a GPS unit is to be a navigation aid and as such, should provide you with good direction and routing information to get you to your final destination quickly and safely in the shortest amount of time.  The route guidance on the Navfree is it’s biggest downfall weakness rendering this app a Novelty instead of a serious, trustworthy navigation tool.

The TomTom app is probably the best and most trustworthy GPS app for the iPhone but at a cost of around $50 it’s 50-75% the cost of an entry level portable stand alone GPS..  The Navfree app is not perfect and certainly could use improvement with the navigation calculations.  As a FREE APP and alternative to Google Maps for turn by turn directions Navfree is worth a download and look – I just would caution you to use it as a navigational aid only and not put your blind trust or faith into the guidance information is provides.  If you’re on a budget and can’t afford the $40-$50 bucks then Navfree is the GPS app for you.  If you need more reliable and trustworthy route info and guidance then spend the money and download one of the paid Garmin, Magellan or TomTom apps.

Update January 7, 2012:  I drove up to Lac La Biche this week and tested the NavFree GPS app against my built in Honda GPS  and found the results quite surprising.  Both NavFree and Honda GPS  guidance had missed routes and unmapped roads but much to my amazement in Rural Alberta the NavFree GPS Live Canada App provided more map coverage and better overall guidance then the built in Factory Honda GPS.  NavFree had more mapped roads, more detail and gave better guidance once out of town then did the Honda GPS which had several up-mapped or unverified roads in rural Alberta.  The GUI and Graphics on the NavFree GPS Canada App were also much better with more graphical information and detail than the $3000 Honda built in GPS.

I should note that GPS Navigation provided by either unit was correct 100 percent of the time during the trip, using BOTH units provided much better navigation than either one independently.  Often when the road was unmapped or unverified by one system it was mapped and guidance was available on the other system.  Using both together was Great!

While the NavFree Live GPS Canada app has a tough time in urban Edmonton it did much better in rural Alberta – probably because the route options and alternative choices are much less.  Since NavFree Live Canada is a Free App it’s worth a download if for nothing else then to provide you with additional GPS and Routing Information to confirm the information on your primary GPS or provide you with alternative routes.