Paul and Deanna Pappas were victims of vandalism three times over a period of seven months.  The vandals were thought to be kids in the neighborhood who were throwing rocks at the Pappas’ home and on two occasions broke the garage window and the third time broke the feature foyer window.  Insurance covered the cost of each vandalism occurrence however Paul still had to pay the $1500 in deductibles.  When the feature window was broken, glass shattered inside the house and Paul knew that was it, something needed to be done.

Paul and Deanna already had a home alarm system but the system only notified them when the window was broken and didn’t prevent the act of vandalism from occurring.  The Pappas’ wanted a counter measure to stop the vandalism before it occurred.  Paul thought of security cameras but didn’t know how they would look installed on his home.  Costco and other retailers have relatively cheap camera systems but I didn’t like the look of the cameras, the picture quality, if they would record or if you could view them remotely on my iPhone. 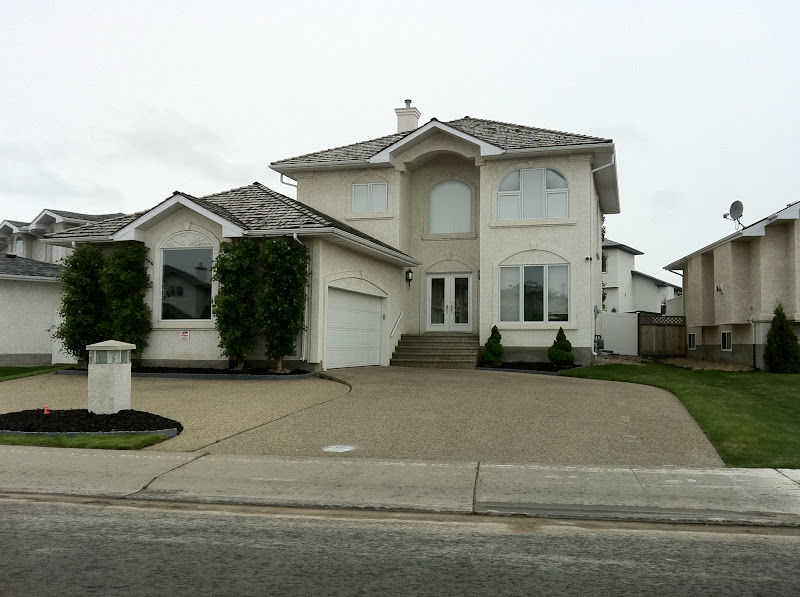 Paul called Doyle at Ion Security for a Free Home Security Evaluation.  Doyle came out to the house one evening and had a look around the property, took a look at our existing alarm system and then made some recommendations on preventative security measures and camera system options.  One of the first things Doyle told us said Paul was to remove the grey limestone rock we had in our flower and tree beds and replace it with wood based mulch … “it may not look as nice – but at least you take away the convenient ammunition – Rocks”.  Most crimes of vandalism are acts of opportunity, take away the convenience or opportunity and vandals will look elsewhere for an easier target.

What about cameras?   Cameras and signage can be a good deterrent to vandalism.  Studies show vandalism decreases significantly when cameras are installed.  For the purposes of ‘deterrence’ Doyle says you can use either real or dummy cameras or as he calls them Non-functioning cameras.  Both real and non-functioning cameras will have the same effect on most vandalism however if you choose to install dummy cameras you should make sure they LOOK real.  Thieves and vandals can spot a cheap  dollar store or $20 dollar dummy camera right away and when they know it’s fake – the deterrent factor is gone.  Doyle tells us his non-functioning cameras are either real cameras which stopped working and could not be repaired, or cameras made with real lenses and cameras housings just missing the internal guts. 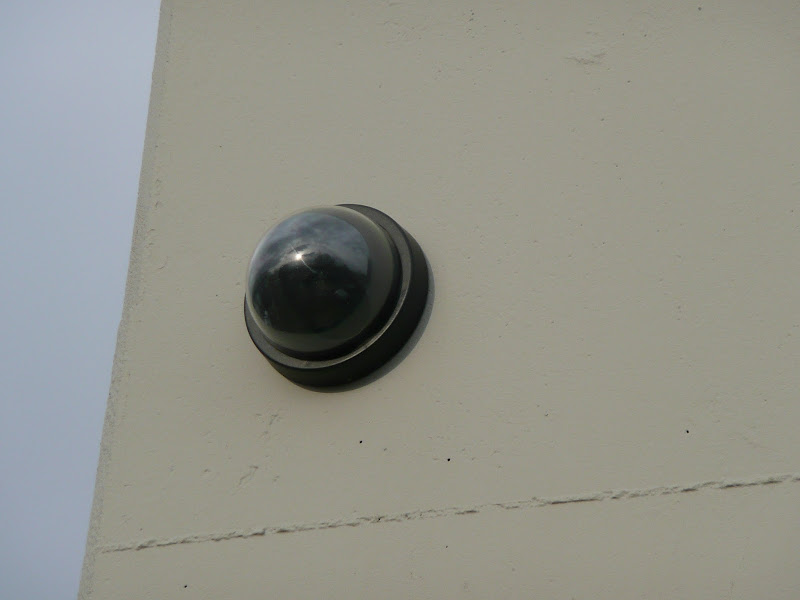 Tip:  If you decide to use a “Dummy or non-functioning camera” even the cheap ones, don’t install the battery for the so called “realistic blinking LED”.  Real cameras don’t have blinking lights and if you install a dummy camera with a “Blinking LED” light the only thing you’re doing is advertising “Hey Look at me I’m a Dummy Camera”.  Thieves and vandals are not deterred or scared away by cheap looking, artificial dummy cameras in fact the opposite is true – If they believe the camera to be fake they may be enticed to “Test It Out”,  I’ll bet you that camera is fake,  watch I’ll throw this rock and nothing will happen.  This is definitely NOT what you want to happen and not a preventative measure.

After listening to the pros and cons and cost difference between real and non-functioning Cameras Paul and Deanna decided to go with real cameras.  Recording and the ability to WATCH live streaming video coverage of their home on their iPhones was very important to the Pappas as well as easy of use and the ability to view the cameras on a Mac or PC Computer. 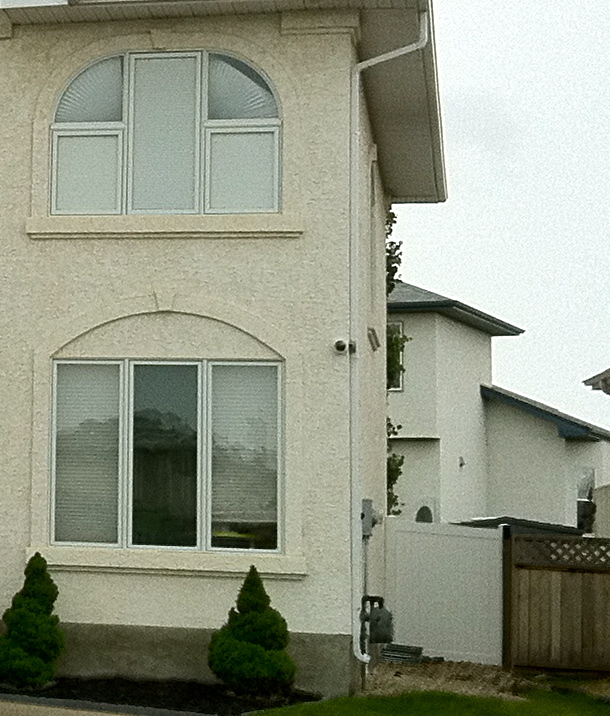 Doyle designed a system based around the easy to use, cross platform Digital Watchdog DVR (Digital Video Recorder).  Two Hi-Resolution cameras would be originally installed and the Digital Watchdog DVR would allow up to four cameras to be connects providing the ability for future expansion.  On December 4th, 2010, Ion Security came to the Pappas home and installed the cameras.  A wide vari-focal, weatherproof, dome camera with night vision was installed on the front corner of the home.  Wiring needed to be ran into a surface mounted weatherproof electrical box and then concealed along the eavestrough down spot and into the basement.  A second camera was installed inside the garage window looking out.  This camera was ultra wide angle 1.5mm lens, high resolution interior camera which Doyle was able to mount on the garage window sill.  Once the cameras were installed the DVR was connected and programmed for internet access allowing Paul and Deanna to view the cameras from their iPhones with the Free remote viewer app.

The images on the Ion Security Camera system are incredible says Paul, noting the clarity of the picture on the front driveway dome camera.  “I can’t believe how the cameras switch from color to black and white at night and they can even see in the dark”.

In addition to installing two security cameras Ion also installed a “Under Video Surveillance” sign below the front window and Paul removed the limestone rocks from the flower beds as suggested and replaced them with mulch.  Doyle also suggested that Paul install a motion senor light or put the garage light on a timer.   Paul didn’t want to install an ugly motion sensor light, Deanna just doesn’t like the look of them but I did install a timer switch on the outside garage light which works great. 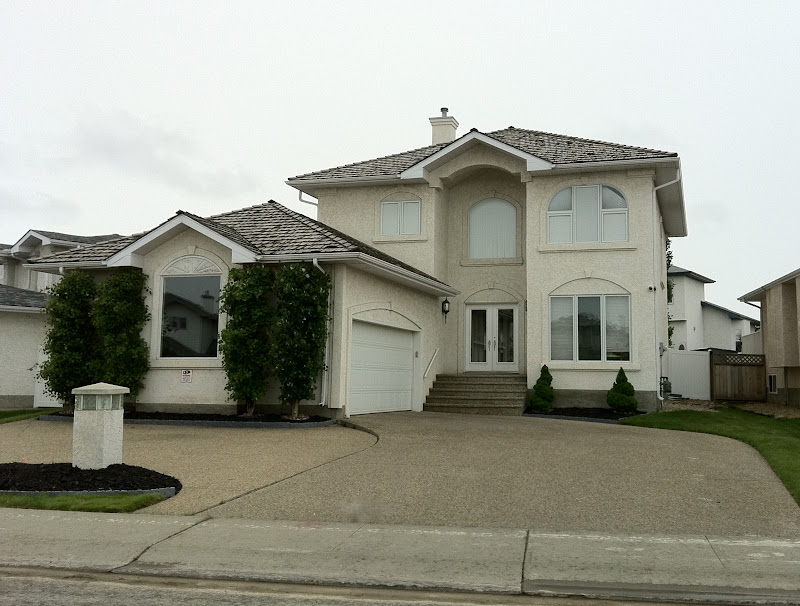 A year has passed since Ion Security installed the cameras at our home and we are happy to report there have been no issues with security or vandalism and the system has lived up to our expectations.  We did have one problem this summer says Paul, after a lighting storm one of the cameras stopped working.  Doyle came out promptly and determined that a power surge had taken out the power supply for the camera and replaced it at no charge even though the warranty did not cover damage from power surges or lighting.

The Ion Security camera system in our home has become part of our daily life, we use the cameras to monitor the driveway and our vehicles when parked, we can see when visitors come over and arrive, we can watch on our iPad and see if our car starter started, we can monitor our children playing in the driveway, Paul and Deanna both like that they can remote view the cameras on their iPhones and see if either one is at home.  Now that we have an Ion Camera system, we can’t imagine being without it.  The system is so useful we’re going to add two more cameras so we can monitor and verify our alarm system when it goes off and remote view it to see if the alarm is real or false as well as better monitor our house.  The Pappas’s have also talked to Doyle about Home Integration, “that’s our next step says Paul”.