Hot Trends in Technology for 2012

With the Consumer Electronics Show 2112, only 1 day away what’s going to be the predominating theme of the show.

CES 2011 was the year of the tablet with more than 40 new tablets being shown or announced and released later in the year.  CES 2011 Tablet thunder was overshadowed by Apple’s announcement for the new iPad2 in March 2011 and the iPad 2 dominated the entire consumer electronics market for the entire year crushing rivals from Blackberry, HP and Motorola.  Only Samsung with it’s Galaxy Tab could compete however modestly with Apple’s iPad.

CES 2012 will be all about APPS.  With Millions of tablets in the hands of consumers and millions more being sold every month, All electronics manufacturers will be releasing APPS or incorporating APPS into their products.  TV’s will continue to become Smarter as internet connectivity is no longer an option but standard feature on most HDTV flat panels sold in 2012.  Learning from the financial success of iPhones and iPads,  ALL TV’s will have APPS and most major manufacturers will launch or enhance their own APP Stores.  APPS on your TV will allow you to connect to facebook, twitter, google, picasa, netflix and other webservices.

The television remote will undergo some major upgrades in 2012.  With the advent of SMART TV and APPS a keyboard or other input device will be needed to quickly and easily input text data for launching, navigating and surfing apps.  Smart TV’s will either link to iPad and tablet devices to be used as keyboards or second screens or Qwerty keyboards will be incorporated onto remote controls.  LG will release it’s magic remote which works similar to a Wii wireless controller with motion and even voice recognition control.  Look for more manufactures to develop easier methods to navigate the web on our televisions. 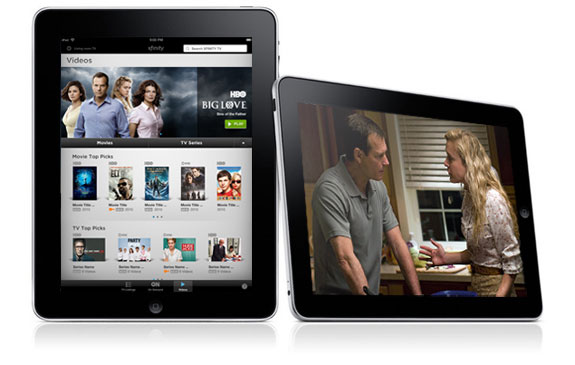 With more than 70 percent of tablet users watching steaming video on their tablets, streaming video either from your television to your iPad and iPhone or from your cable box and supplier to your mobile devices will also grow and evolve in 2012.  Gone are the days of watching a fixed display in a single room.  In 2012 we will become increasingly mobile with our consumption of media.  Television will become more flexible as we shift from watching TV programming at scheduled time periods to saving, storing and streaming television programming to other Televisions in our homes and onto our mobile devices either at home or on the road.

While new TV’s will have SMART and Connected features built in, several manufacturers will continue to make SMART TV boxes which will add SMART TV functionality to older sets.  Apple TV will evolve from being a hobby product of Apple’s to become the predominate set top box in the market place.  Siri voice recognition will come to Apple TV both as a separate set top box and as a complete all in one television.  Other manufacturers such as Roku, Hulu, Xbox, PS3 and others will continue to enhance their products to offer more inter connectivity and ala carte programming.

Cloud – Information and services will continue to be pushed to the cloud and although Cloud computing and storage is still not ready for prime time in 2012 it will continue to evolve and become a more important cog in the wheel of our ever increasing connected lives.

Wireless – once again as our daily lives continue to become more digital and virtual rather than analog and real wireless technologies will continue to develop and evolve to transmit our even increasing consumption of data.  We already have wireless transmission of audio, and video and these technologies will continue to improve allowing us faster more reliable transfer speeds for transmitting video streams to our various components throughout the home.  Wireless HDTV video transmission is expensive and can be somewhat flaky right now but things will improve greatly in 2012.

Convergence and Integration:  First came Smart Phones, then Tablet Computers, then Smart TV and now all these things along with our Alarm and Energy systems will become integrated in 2012 to provide consumers with a SMART HOME.  Energy prices and our digital lifestyle will drive the demand for Home Integration.  Home entertainment systems, computer systems, energy management systems, alarm and security systems will all become Integrated into new and older homes.  Home Integration is no longer something for only the Rich MTV Cribs crowd.  Home integration will grow exponentially in 2012 as homeowners look toward technology to save them money on their energy consumption and enhance their ever growing digital lifestyle.

Doyle Serink is a systems integrator, product reviewer and tech writer with more than 25 years experience in the field.