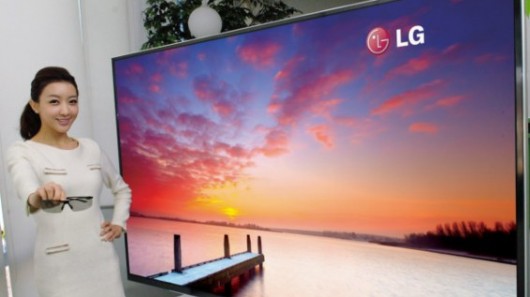 LG will be showing off the “Worlds Largest 3D Ultra Definition TV” as this years Consumer Electronics Show in Las Vegas.  What is Ultra Definition you ask, UDTV has a resolution 4 times the clarity of 1080P HDTV, that’s 8 million pixels at 3840 x 2160.  The 84” LED display features LG’s Zero Bezel Design and Passive Flat Pattern Retarder 3D engine.  Passive 3D technology was criticized earlier this year as having lower resolution than Active Shutter 3D technology but that didn’t stop it from becoming widely sought after and the most popular 3D format on the market today.  With a native resolution of 4 times HDTV, this UDTV will still provide 3D images at twice the resolution or 2k or 2X HDTV – now what do you think critics will find to complain about now.

The mammoth 84” LED TV will have access to LG’s Smart TV platform with Plex engine backbone and navigation will be provided by LG’s new Magic Remote, a remote controlled by Voice Recognition, magic gesture and point (wasn’t Apple supposed to do this?).

No pricing or availability has been announced at this time.