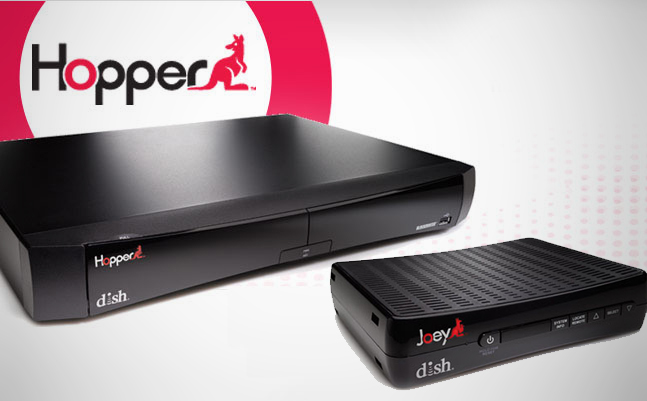 Look out Shaw Gateway and Telus Optik, Dish Network just introduced a 3 tuner networked PVR at CES today called Hopper with thin-client servers called Joey’s.  Dish satellite equipment (echostar) is used by Bell north of the border so it’s only a matter of time till the new gear finds into Canada.

The Dish Hopper is the fastest Satellite Receiver on the market today with a speedy 750Mhz broadcom processor built in.  The built in 3 Tuner PVR is capable of recording up to 6 HD channels and the 2GB hard will record up to 250 hours of HD or 2000 hours of SD programing.  Dish Joey boxes are networked via standard coax (MOCA) so they will run on existing house wiring with no need to run Cat5 to your other TVs.  The Joey’s are the smallest HD boxes on the market not much bigger than a standard router and the system will support 1 Hopper and 3 Joeys to allow viewing in up to four separate rooms.  PVR anywhere is built-in along with a Sling Box which provides streaming to any internet connected devices such as iPads, iPhones and Laptops inside or outside the home.  So far the Hopper sounds pretty amazing but wait there’s more … How about internet and smart phone PVR access, programming and control, WEB, iPad, iPhone control apps and a well designed and laid out, universal whole house remote control using ZigBee radio frequency transmission.  ZigBee is a popular wireless home automation protocol, so we can only guess that somewhere down the road Dish plans to introduce home automation apps to the Hopper as well, although nobody’s talking about that right now. Back side of Joey Thin Client – Source CNET

Dish just introduced the Hopper and Joey at CES 2012 for sale and distribution to their 8 million subscribers in the US beginning next month (February 2012).  There’s no word if or when or if Bell will be selling the Hopper in Canada but we’re predicting you’ll see the Hopper north of the 49th by spring or fall of 2012 at the latest – come one Bell bring  this system to Canada!

This system is seriously SICK and I for one, like many,  will be dropping Shaw and moving back to Bell once the Hopper comes to Canada unless Shaw unleashes MOCA on their Motorola cable boxes.

Check out the video:

Dish Press Release
DISH introduces hopper and joey – next generation whole-home hd dvr Entertainment system
Features two-terabyte hard drive for up to 2,000 hours of entertainment Never miss a primetime network show with PrimeTime Anytime Records up to six programs in HD simultaneously, including PrimeTime Anytime Hopper and three small Joeys let viewers watch HD and control DVR in four rooms
Las Vegas – Jan. 9, 2012 – [NASDAQ: DISH] – DISH Network L.L.C., the nation’s third largest pay TV provider, today introduced a whole-home high definition DVR entertainment system featuring the award-winning Hopper™ and Joey™.
The Hopper HD DVR and accompanying small Joey set-top boxes create a whole-home HD DVR entertainment system that lets DISH customers easily record, pause, and play back shows from any room in the home. While most whole-home DVRs do not have the same DVR functionality on every TV, the Hopper and Joey whole-home system offers the same DVR functionality on every TV, letting customers pause, play and rewind both live and recorded HD programs in up to four rooms.
The Hopper was unveiled by DISH CEO Joe Clayton at the 2012 International CES in Las Vegas today, and it is already winning honors as a CES Innovations 2012 Design and Engineering Award honoree. Pricing and packaging will be announced later this quarter.
The main Hopper unit features: Three satellite TV tuners A two-terabyte hard drive for up to 2,000 hours of video entertainment Up to 250 hours of HD or up to 1,000 hours of SD user recordings Bluetooth for linking to devices such as wireless headphones Picture-in-picture for watching any two channels simultaneously
Combined with a Joey, the Hopper whole-home HD DVR system offers more advanced features: 750 MHz Broadcom processer – the fastest satellite receiver processor available today for a quick, responsive on-screen guide Approximately 50 percent more energy efficient for a four-room installation than previous models ZigBee RF4CE using a proprietary protocol remote with “remote control finder” alert High definition user interface Easy-to-use, fast, graphical, tile-based user interface with predictive search Small, sleek chassis for convenient placement
“Building on a heritage of award-winning DVRs, DISH is proud to be the first to introduce a groundbreaking product that delivers the most choices for TV entertainment by integrating multiple sources of video into one set-top box,” said DISH Network CEO Joe Clayton. “The Hopper gives our customers network TV shows on demand and thousands of family movie choices streaming or delivered to the hard drive. With its massive storage, the Hopper leads the industry in delivering the most entertainment options, bar none, for every member of the household.”
The Hopper – Endless Entertainment Options
The Hopper’s new, unparalleled feature, PrimeTime Anytime™ allows customers, with one click, to record using a single tuner all of the primetime TV programming from ABC, CBS, FOX and NBC – the networks that deliver the most popular shows during primetime. Once activated by a customer, PrimeTime Anytime records network programming in high definition, where available, every night and stores them for eight days after they have aired. This creates an on-demand library of approximately 100 hours of primetime TV shows, and makes it easy to catch up on episodes from last night and last week’s airing.
The Hopper can record up to six TV shows at once (two live programs and four PrimeTime Anytime shows) while allowing viewers to watch up to four different recorded or on-demand