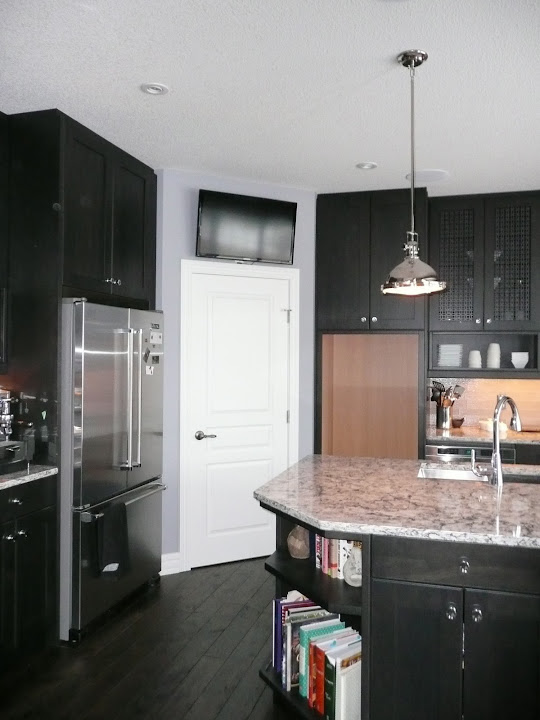 Moving into a new home is always exciting but drilling into  1/2 inch thick porcelain tile to hang your 60″ HDTV above your fireplace can be a daunting task especially without the right tools and expertise.

Chris and Marcy Taffert had such a challenge for Doyle from Ion Security and Integration the job entailed mounting two flat screen TVs in their new home, one 60″ above the fireplace and one 32″ above the pantry door in the kitchen.

Each TV install had it’s own unique circumstances but Doyle was up to the challenge.

Kitchen TV:  The first install was going to be the kitchen pantry TV,  Chris initially purchased a 22 inch TV for this wall however once held in place during the preliminary meeting, it was obvious the 22” TV would be Too Small for the wall to cover up the cabling and too small for viewing from the intended seating position the kitchen island.  Doyle recommended returning the 22 inch TV and suggested a 32 inch would look a lot better.  Doyle left Chris the option of purchasing the TV himself or Doyle could also sell and supply him one.  When you buy a TV from Ion Security and Integration you get additional service and warranty at no charge plus the convenience of not having to shop around.  After quoting Chris a price on the new TV the decision was a no brainer – the price was cheaper than the electronics stores including delivery and extended warranty! 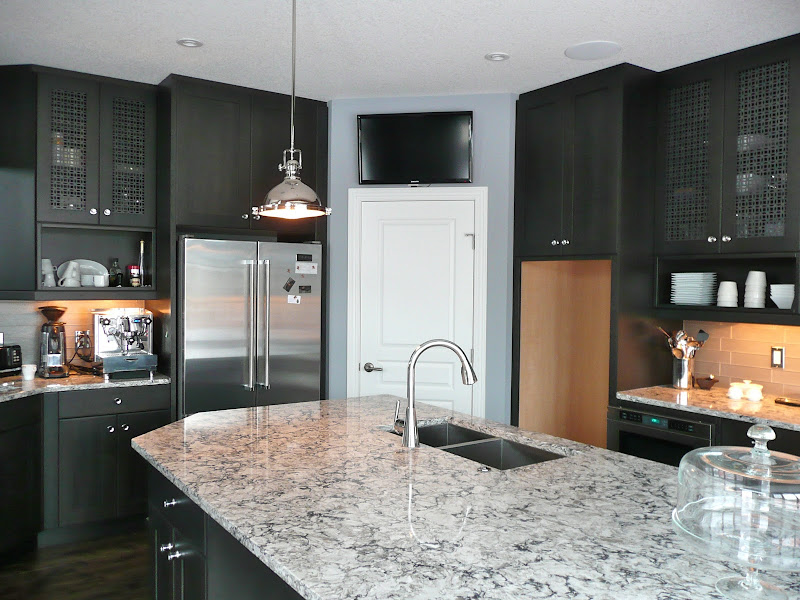 The initial meeting was on Tuesday and the install was booked for the following Monday.  Doyle arrived at the Taffert home with the TV brackets, new 32” Samsung TV and went right to work installing the kitchen TV.  There were two complications with the kitchen TV to deal with.  First the electrical plug was directly behind where the TV bracket needed to be located and the TV wall mounting plate would cover the electrical plug.  Secondly Chris had used Cat6 cabling and baluns to transmit the HDTV signal from the basement Telus Optik TV receiver to the kitchen so the balun, Cat6 cabling and IR repeater modules were also in the way of the bracket.  Chris couldn’t figure how to get around these obstacles but Doyle with his installation experience of more than 2000 TV installs was already prepared with solutions.  First Doyle moved the Cat6 cabling and baluns to an area above where the TV wall plate needed to go.  The TV wall plate and TV itself would cover the new holes which needed to be made and therefore no patching or drywall repair would be required.  The next step would be to deal with the electrical plug problem – that’s a little tricky,  Doyle choose a Zero Clearance wall mount bracket which normally mounts the TV 4mm from the wall.  Special spacers were added behind the bracket to shim out wall plate from the wall enough to allow a special right angle FLAT electrical plug to be plugged in behind the wall bracket before installation moving the electrical plug from behind the wall plate to above it.  With the electrical, wiring and baluns all out of the way the 32” Samsung LED TV was then mounted to the wall and connected, angled and adjusted.  Since the Telus TV boxes were located in the basement and IR repeater was installed below the TV to relay IR signals from the Telus Remote to the corresponding Optik TV HD box.  The kitchen TV looked marvelous and with that one out of the way Doyle turned his attention to the living room fireplace TV. 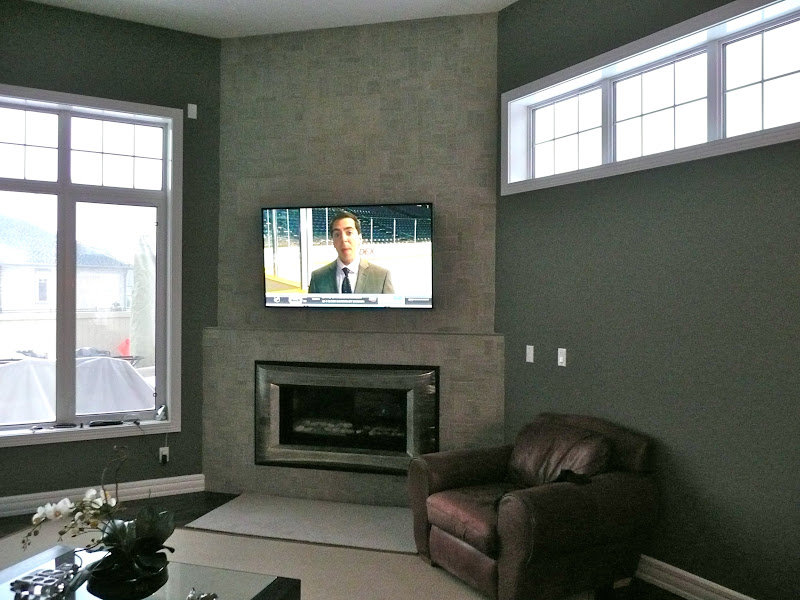 Living Room Fireplace TV:  The challenge for the living room fireplace TV was to mount the TV low enough for viewing while still covering the recessed cable and power outlet installed in the wall and to securing fasten the TV to the 1/2 inch thick porcelain tile without cracking or breaking it.  Even with his experience and special tools Doyle admits drilling into 1/2” thick glass tile is always a little unnerving … one small slip of the hammer drill or drilling to close to the edge of the tile and the tile will chip, crack or break. 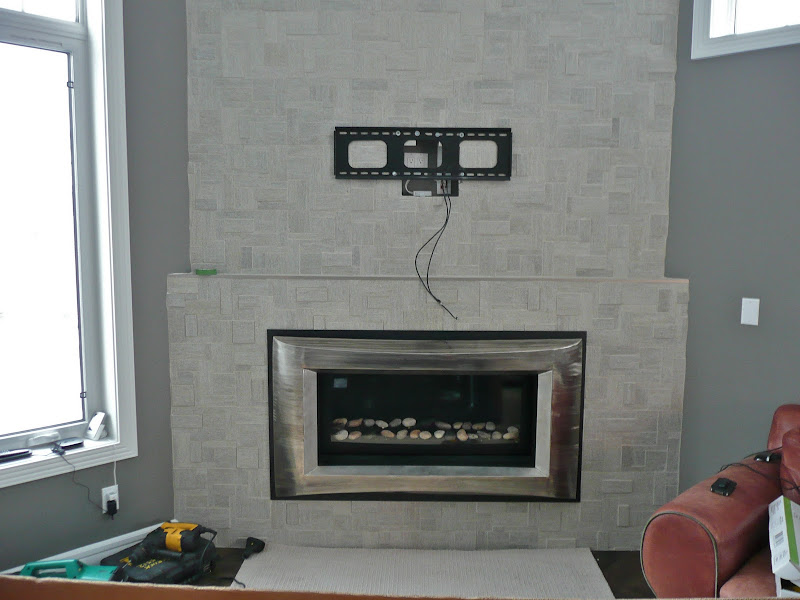 On these type of installs Doyle says the key is to take your time and don’t rush anything … patience.  After measuring the TV and wall mounting plate, determining the stud location in the wall and electrical and wiring box Doyle needed to make some adjustments to the TV mounting hangers and wall plate.  Once those were done the holes were marked and the moment of truth – The Drilling began.  Doyle uses special drill bits made for glass and a powerful variable speed Dewalt hammer drill.  First a small pilot hole is drilled making sure the stud or backing is hit and then the larger hole for the lag screw is made.  Care and caution is used with each hole drilled and usually everything goes according to plan.  For this install all holes drilled through fine with a few minor chipping in the tile which is covered by the mounting plate, whew! commented Doyle – no cracks!  Once the rear mounting plate is attached to the wall and all power and cabling is prepped the TV is ready to be hung in place.  Chris assisted Doyle in lifting the Samsung 60” LED display onto the wall mount and then Doyle proceeded to connect all the components which included an Apple TV which was installed behind the display in addition to the Telus TV HD PVR box in the basement connected via HDMI Baluns.  An IR repeater was also installed for IR control while a Harmony 900 RF remote provided whole house and IR free control.  A Sonos music system and amplifier power for TV and music sound to the ceiling mounted speakers. 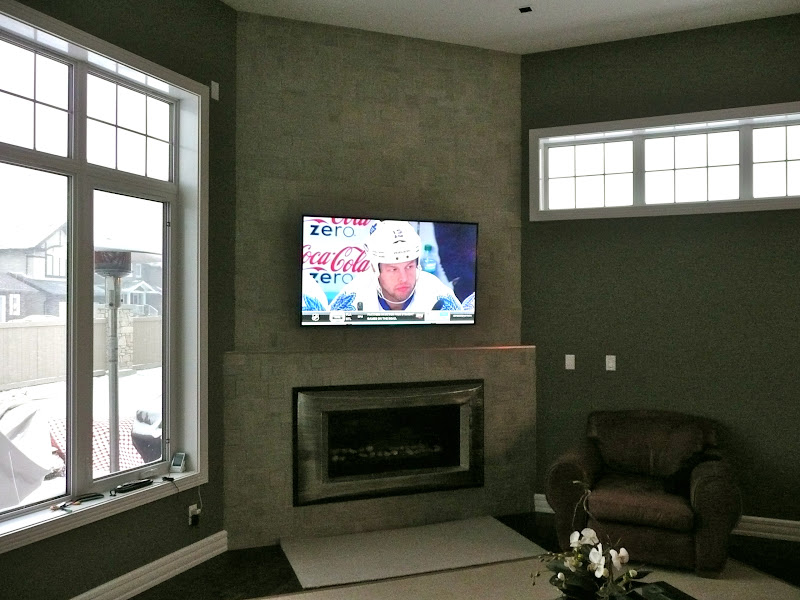 For this TV install Doyle used a zero clearance tiltable wall mount bracket with mounted the TV just over 1/2 inch from the wall and allowed it to tilt just slightly providing perfect viewing when sitting on the couch.  The Samsung 60” LED TV looked stunning against the silver gray tile and blended in well with the brushed aluminum trimmed fireplace

If you have a challenging TV installation like Taffert’s give Doyle a call at ION Security and Integration for a Free, No Obligation, In Home consultation.