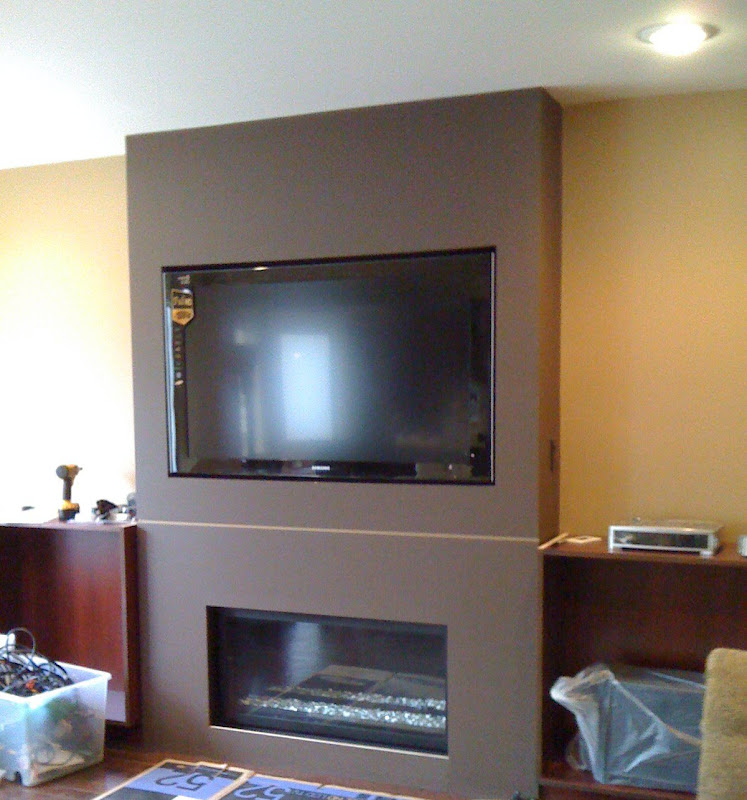 After owning their West End home for more than 25 years Sara and Nader decided it was time for a whole house makeover.  The renovation encompassed the entire home including remodeling the kitchen, sunken family room, master bedroom, ensuite bathroom and complete new carpets and floors throughout.  The original home design had a sunken family room which was in vogue back in 1981 when the home was originally built but Nader and Sara decided to build up the family room floor to be level with the kitchen and main level flooring and as part of the renovation add a new fireplace and home theater system.

Achieving the first objective was fairly routine for Doyle, he’s installed more than 2,000 TV’s including several recessed into the wall.  The first step to recessing the television was to obtain the exact measurements for the flat screen – this meant buying the TV before the renovation began (three months in advance of the actual installation).  The reason for this is twofold Doyle explains …. “First we always like to measure the actual TV to get an exact measurement,  manufacturers do provide dimensions and specs for their products however they are often inaccurate and all specifications are “Subject to Change”.  Doyle comments “When you’re building a TV pocket inside a wall to fit a specific television you need the exact dimensions … there’s no room for estimates or error”.  The second reason you need to purchase and have physical possession of the TV you wish to mount before your renovation begins is that manufacturers often change, discontinue and release new TV models at various times of the year.  Unlike new cars which usually get released each fall or Q1 in the winter,  TV manufacturers are constantly changing their TV models throughout the year adding or deleting features and changing the size, shape and look of their Television chassis’s.  “If you’re building a TV into a wall pocket and don’t have the actual TV in your possession … you run the risk of the model being discontinued or the size changing and not fitting into the designed wall cavity by the time the final installation is ready” Doyle comments, we’ve avoided potential disasters such as this more than a dozen times, due to manufacturers discontinuing the TV model and coming out with a new one with a different size.  Normally TV models and sizes are good for about nine months, but we’ve seen them be discontinued as quickly as 4 months.  A normal renovation is 3-6 months from planning to completion which would mean the TV specified would not be available at the time of installation if the home owner didn’t purchase the TV first before the reno began.” 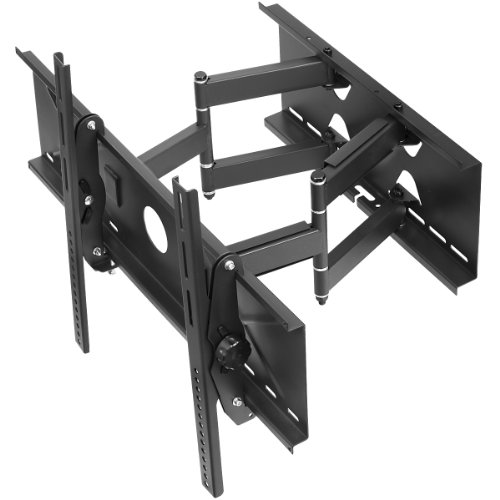 A Samsung 52” LCD flat panel TV was chosen for the fireplace TV installation while a 42” Sharp would be installed in the master bedroom.  With the TV in hand the next step for Doyle was to determine what type of mount would be used and then measure the TV for height and width and then the TV and mount together for depth.  These dimensions would then be provided to the contractor and framer and verified on-site once the framing was done before the drywall was installed.  Since the TV selected was required to move away from the wall for mounting and then be pushed back into the wall to recess the TV an articulating wall mount was necessary and additional backing and support would also be necessary to support the additional weight.  With the family room and bedroom TV’s figured out the next step was to tackle the surround sound.

The family room was open to the kitchen with no rear wall to mount surround sound speakers to.  The floor joists were exposed due to the new raised floor being installed however the walls and ceiling were to remain intact and the home was a 2 story so there was no way to get into the ceiling to install rear surround sound speakers.  Wall mount rear channel speakers could be installed on the side walls however one wall had a large window and curtains which didn’t provide enough space to install an in wall speaker.  With all options for rear channel speakers ruled out, Doyle turned to Bose and their innovative Cinemate 3-2-1 GSX speaker system to provided surround sound for the room.  The Bose Cinemate 3-2-1 GSX system consists of two small speakers and powered subwoofer which provides a virtual surround sound with only two front mounted speakers and no rear channels. 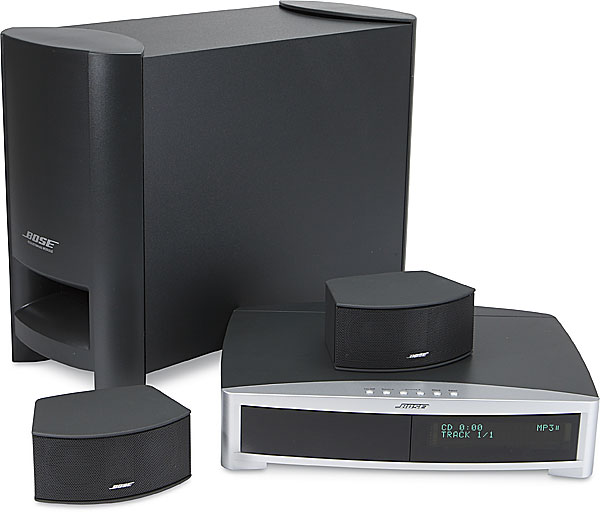 Doyle had used the Bose Cinemate II system before in smaller rooms with great success however this would be the first installation in a larger family room and the first install in a room with no rear wall to reflect and bounce the sound off  to create the surround sound effect.  The rear wall of the family room was open to the kitchen and the back wall of the kitchen was another 15 feet behind where the couch was to be located and the primary listening position.

Without any other options (soundbar was ruled out) Doyle wired the family room up for the Bose 3-2-1 GSX system and speakers and would wait till the final installation day to see what it would sound like.

The last requirement of the A/V makeover was to make the system easy to use.  For ease of use Doyle designed the whole AV system around the Bose Cinemate 3-2-1 Amplifier/DVD player, Receiver.  The Bose 3-2-1 GSX system can be purchased as a speaker system and amplifier only to allow you to hook up your own DVD and other components or a complete receiver with Amp, Tuner and DVD built in.  External inputs on the GSX receiver are limited to two and Nader wanted to connect a Shaw cable box, Xbox and VCR to the receiver as well.  To expand the inputs of the Bose GSX receiver Doyle installed a component video and composite video upscaling learning switch which once connected and programmed provided infrared switching of all components as if the external switching box was built as part of the Bose receiver.  The final touch for ease of use was to install and program a Logitech Harmony One Remote for convenient one touch access to all components. 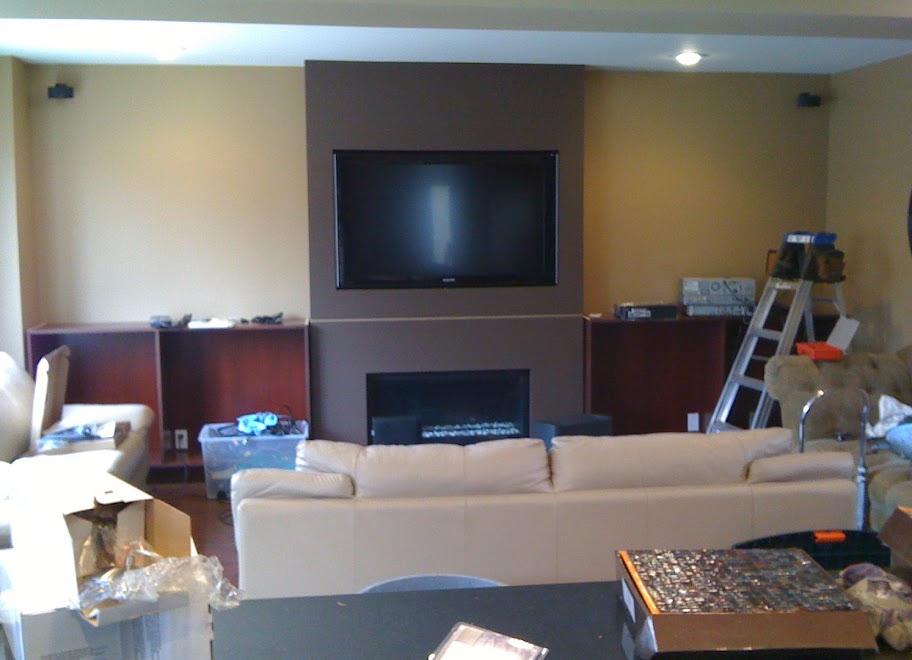 After the rough in framing was complete Doyle roughed in the necessary wiring for all speakers, TV, components and equipment.  New cable lines needed to be run from the utility room to the new equipment locations and once complete all Doyle had to do was wait till the room was ready for final install.

Final installation came nine weeks after the rough in wiring was done, and Doyle was filled with a kind of nervous anticipation …  “I know the TV fill fit into the TV pocket but I have no idea what the Bose 3-2-1 GSX system will sound like with the open back wall.”  With all the components, equipment and wiring needed to be installed and connected the final installation took two days to complete and at 3:30pm on Day 2 the moment of truth was at hand as Doyle powered up the Bose 3-2-1 GSX system and put it through it’s paces.  First was the Demo DVD Disc which comes with every Bose 3-2-1 system.  With the TV one, the DVD in and the volume turned up, everyone gathered into the family room to hear what the system would sound like – WOW! Incredible! How do they do that! and tons of smiles and looks of surprise and amazement filled the room, even Doyle himself had a smile on his face as he too was surprised at the virtual surround sound emanating from just the two small wall mounted Bose Gemstone Speaker Arrays.    I asked Doyle for his reaction “With sound you never really know until you turn it on and power it up exactly what it will sound like … you have a good idea but sometimes the room acoustics just don’t work to help you and I was concerned because we didn’t have a rear wall in this room that the virtual surround sound wouldn’t be as predominate as it turned out to be … I’m happy for my client’s, it looks and sounds great and you can see by their smiles – it was the right decision and the Bose 3-2-1 GSX is a great solution”.

With the family room complete next we took a look at how the new Sharp Aquos 42” installation turned out in the bedroom.  The Sharp LCD was mounted flat to the wall using a zero clearance wall mount, although not flush like the TV recessed into the fireplace the 1.1” Sharp LCD was thin and with the the wall mount bracket adding only another .5” to the thickness the LCD TV looks like a picture hanging from the wall.

The 42” size was perfect for the bedroom and Doyle’s install was very clean and professional with the TV centered perfectly on the bedroom wall and all cabling hidden behind the TV inside the wall and behind the baseboard.

If you’re planning a home renovation, building a new home or just need a TV installed give Doyle a call at Ion Security and Integration 780-489-5522 or email info@ionsecuritysystems.com.