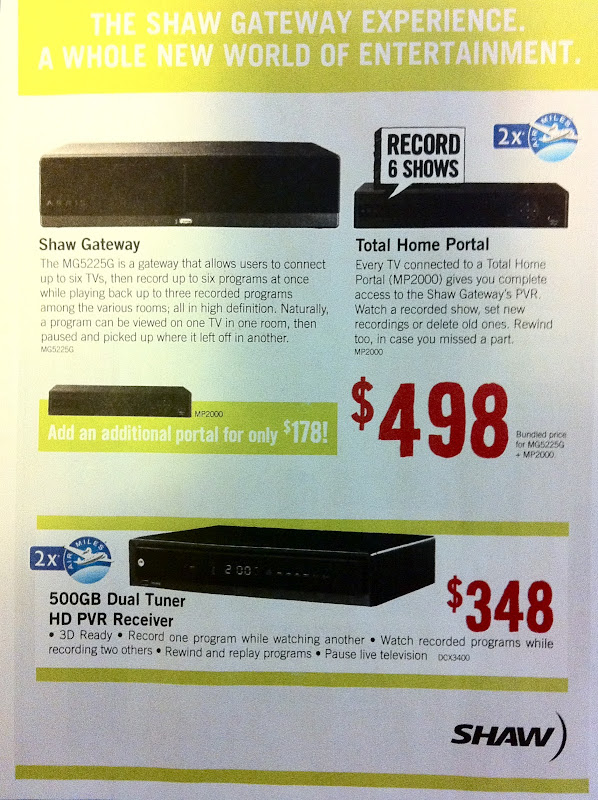 Shaw increased the wholesale and retail prices of the Motorola DCX3400 and DCX3200 cable boxes this week in hopes that customers will decide to buy the new Gateway Hub and Portal based on price rather than features and advanced technology.

Correction:  Sean at Shaw Cable contacted Techtipsandtoys today, to let us know the price increase only applies to the Motorola DCX3400 PVR,  the Non-PVR Motorola DCX3200 is still $142.00 as of 2/21/2012.  Sean commented the price increase was due to a promotion expiring.  Thanks for providing the official pricing information Sean.

Why the price increase?  Did the Canadian dollar lose 50% and the exchange go up? No.  Did Motorola double it’s wholesale price to Shaw – No,  why the increase then?  Simple,  Shaw is trying to persuade customers to buy the problematic Gateway Hub and Portal based price rather than features and benefits.

I spoke with salespersons at two large electronics retailers this week who told me they get 90% return rates on the Shaw Gateway and hate selling them because they make no money on the product and a few days after the sale 9 out of 10 customers bring it back to the store wanting to refund or exchange for a Shaw Motorola DCX3400, Telus Optik TV or Bell Satellite receiver.  One sales person told me they try to hide or slip out for lunch when they see a Shaw Gateway customer coming back to the store only a few days or week after they purchased the product.  “We know when they have the box in their hands that they’re not here to purchase another TV.  I’ve sold six Gateways in the past month commented one sales rep and every one has come back”.  When the Motorola DCX3400 PVR was priced at $149 dollars, customers were bringing back their 3 or 4 portal Gateway systems and purchasing three DCX3400 PVRs.  The price of three Motorola DCX PVRs was $450 dollars vs the single Gateway system which was $498 a couple weeks ago.   For a short period of time the Gateway was on sale for $398 dollars and even at that price customers still returned it in favor of the Motorola DCX PVR. 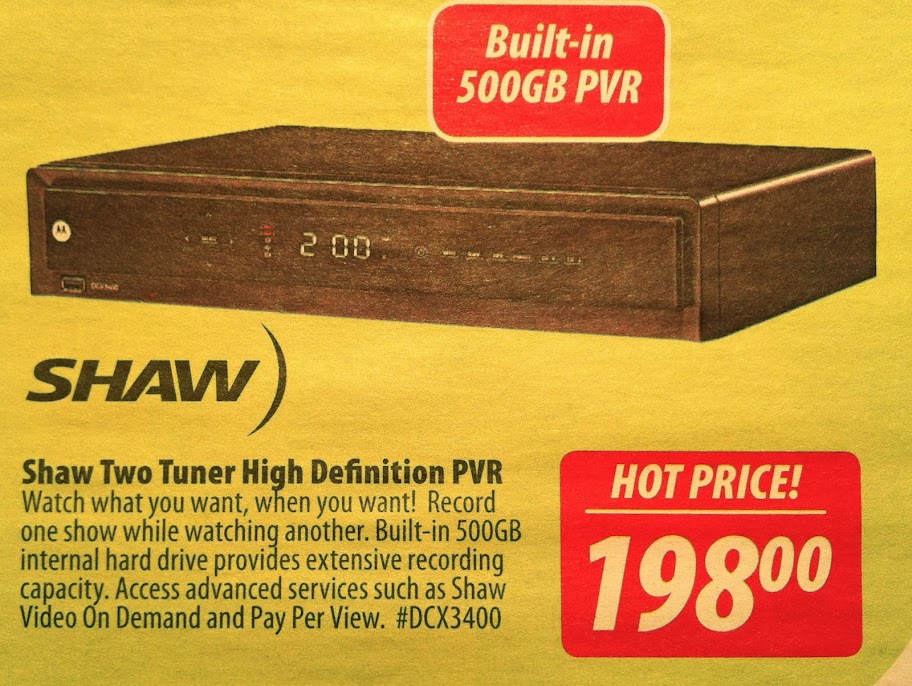 The Gateway system was supposed to be Shaw’s killer product to compete with Telus Optik TV. With all it’s features and supposed benefits the Gateway was to sell at a PREMIUM Price and be the most envied set top box and system available.  Unfortunately for Shaw and it’s customers, myself included the Gateway has been a disappointing and frustrating product whose actual function fell far short of the hype.  One Shaw cable tech I spoke with on a recent job site installation even commented that he wouldn’t install a Gateway in his own house, it’s got too many issues right now he said.

With the new pricing the Gateway hub with 4 portals will cost $940 while 4 Motorola DCX3400 PVRs would cost $1,400 before tax.  Shaw is hoping that $460 dollar different is enough of a saving to persuade customers to purchase the Shaw Gateway instead of the Motorola cable boxes and further once they get it home and experience all the glitches Shaw’s banking the $460 dollar price difference will be enough of a deterrent to make customers keep the problematic Gateway rather than returning it.  Wow what a marketing campaign …  Buy a Gateway – it’s cheaper and has more problems than other competitive products but look at the money you’ll save!  I’ve got news for you Shaw, you can dress it up anyway you like, but if it looks like a dog and barks like a dog …. it’s still a dog.

You may have noticed that Shaw has stopped promoting the Gateway and is now marketing their HD Programming under the new name SHAW EXO.  Shaw is claiming  EXO to be better Telus or Bell but is it really?  As a systems integrator who gets involved with all three service providers weekly and has Shaw personally as my cable provider I cannot say that it has superior HD to either Bell or Telus.  I can say that Shaw’s internet service is faster but as far as HD picture quality and sound – Shaw’s not better or worse than Telus or Bell.  On the Audio Side of things I would say Bell and Telus are better than Shaw as my personal system and several of my client’s Shaw Cable boxes experience audio dropouts from time to time with some customers experiencing these audio dropouts more frequently than others.  I have never experienced audio dropout on Telus or Bell.

Shaw is definitely better than Telus with respect to high speed internet and I highly recommend Shaw over Telus for the best internet experience. 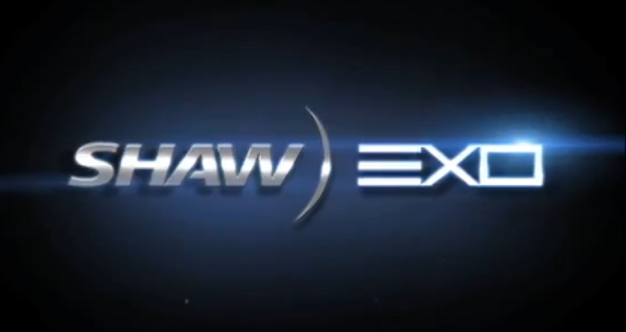 Shaw’s new pricing strategy is a Win – Win for Shaw and a Lose-Lose for it’s customers.  Shaw wins because if you by the flaky Gateway and keep it they get rid of some of their inventory and build up the Gateway customer base (hopefully they’ll be increasing their support center staff also to handle the increased Gateway support calls).  If customers return the Gateway or decide to purchase Motorola boxes instead then Shaw makes extra bonus profit margins on these boxes which help to offset the loses on the Gateway so either way Shaw wins and it’s customers are the big losers.

There is of course another scenario which Shaw must have thought about … what if customers switch to Bell or Telus due to the high equipment cost of Shaw’s Motorola boxes?  The higher Shaw raises their equipment prices the more attractive the alternatives become and with Bell rumored to be bringing the Dish Hopper and Joey to Canada later this spring or fall,  Shaw’s ill fated Gateway just won’t be able to compete with the slick new Whole House PVR from Bell.

So If a person needs to purchase a cable box today – What should they do?  My best advice is to SHOP AROUND,  while some electronics retailers increased the price of the Shaw DCX3400 PVRs this week another retailer London Drugs, is advertising the Shaw DCX3400 for $198 at least for another week.  Keep in mind that most electronics retailers Price Match so if you’re not close to a London Drugs, Visions, Best Buy and Future Shop should match London Drugs pricing.