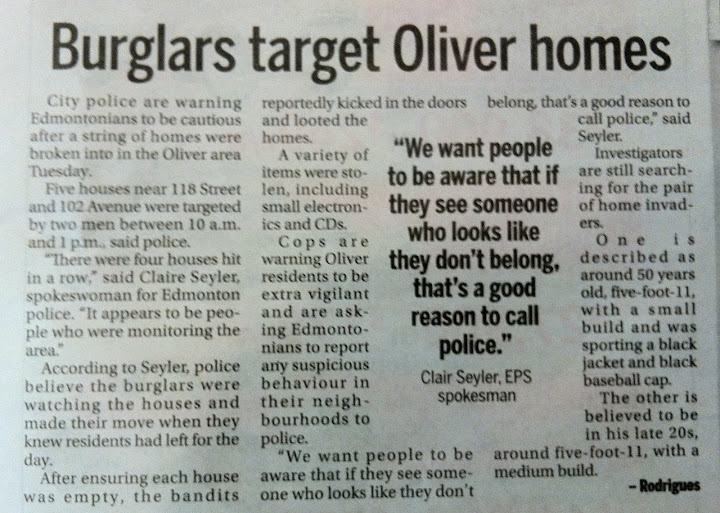 As reported in today’s Edmonton Sun, Edmonton City Police (EPS) are warning residents in the Oliver neighborhood to keep a watchful eye out for suspicious persons and behaviors after a recent rash of break and enters.

Five houses in the Oliver area near 118 street and 102 avenue were targeted by two men between 10am and 1pm recently.

Claire Seyler spokesperson for EPS noted that four houses in a row were hit.  EPS believe the thieves were watching the houses for sometime before they made there move ensuring each house was empty at the time and none of the homes were equipped with burglar alarm systems.

The thieves kicked in the doors and stole a variety of items including small electronics.  Normally August is the busiest month for break and enters in the city of Edmonton as burglaries generally slow down in the cold winter months.  This year the mild winter conditions have lead to an increase in calls from victims of burglaries as the lack of snow and good road and sidewalk conditions make getaways quicker and don’t leave tell tale evidence such as shoe prints and tire tracks in the snow.

Burglar alarms, security systems and cameras may not prevent all crimes but they do provide an effective deterrent as thieves often look for the easiest targets making homes with security systems more secure and less likely to be targeted.

Update:  After the posting of this story two more homes were burglarized in the Oliver neighborhood.

If you’re interested in protecting your home or office with a security system or video surveillance system give Doyle at Ion Security a call at 780-489-5522 or email info@ionsecuritysystems.com for a free no obligation security evaluation.