I recently had a my main Mac computer develop a kernel panic which resulted in the proverbial Mac Grey Screen of Death and required restoring the operating system from a Time Machine Backup (more on that in another post).  After restoring my Mac everything seemed to work and no data was missing or so I thought.

A few days after my restore I noticed at about 134 pictures in my iPhoto library were no longer accessible.  I scanned the hard drive and time machine backup only confirm the original photo files were gone, vaporized.  I don’t know what happen but somehow all the photos I had downloaded in the three days prior to my computer crashing were gone. 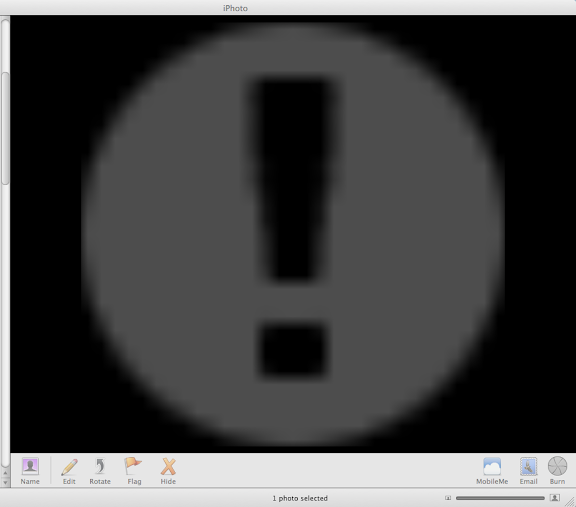 I did several Google Searches trying to find a method to recover my  photos but everything I tried didn’t work.  Rebuilding my iPhoto library didn’t work, repair disc permission didn’t work either.  No matter what I tried the small preview thumbnail images of the photos were visible in iPhoto but when I clicked on them, all I got was a black screen with a grey question mark because I photo couldn’t find the original jpeg file.

Since I was was unsuccessful trying to restore the images off the hard drive and time machine backup, I thought there might be a way to recover the pictures from my camera’s memory card.  I always erase my camera memory card once I download the pictures into iPhoto so the camera’s SD card was blank.  After hours of research I discovered a little Mac software program called exif-untrasher which is an OSX program used to recover deleted images from SD and Compact flash memory cards.

I was skeptical that this Free/Donation supported software would work,  but feeling like I had nothing to lose, I downloaded the program and gave it a shot. 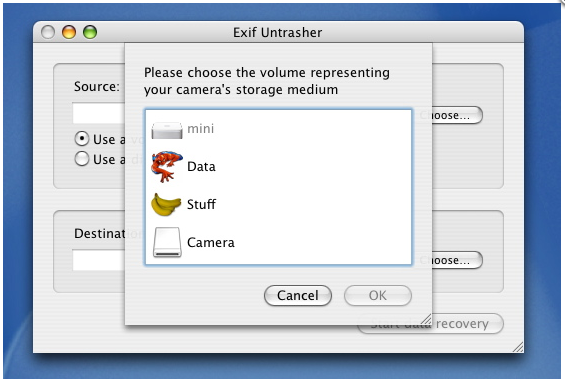 Exif-Untrasher, opened to a home screen which asked me to select the memory card I wished to scan.  I selected my BLANK SD card located in my memory card reader and then patiently waited as exif-untrasher did its’ thing.  The program scanned my memory card and amazingly came back with a message … 315 deleted photographs on the card.

Exif-Untrasher then asked me to select a destination file to save the recovered photographs to and once I clicked the Start data recovery exif-untrasher started to complied, decode and restore the previous deleted images. 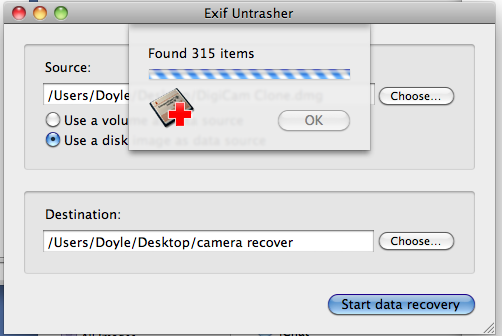 The whole process of scanning the memory card and then restoring the images is a lengthy one.  My memory card was 16GB but wasn’t full and contained both jpeg and movie files.  Exif-Untrasher can only restore jpeg files and cannot restore RAW or movie files so the large movie files contained on the SD card probably slowed the process down a little.  The entire restoration process for 315 pictures took a little over 1.5 hours but in the end my missing iPhoto images were recovered from the original memory card as well as several others.

It Happened Again:  Fast forward three weeks and my iMac developed a problem once again requiring restoration from another time machine backup.  Once again time machine was successful in restoring my Mac back to working order however 95 iPhoto pictures were corrupted and the thumbnails were visible in iPhoto however the actual large picture files were gone.  I pulled out the original memory card from the card which held the pictures which were erased and launched Exif-Untrasher again hoping to recover the missing files.  Exif-Untrasher began to work it’s magic once again however this time the process was unsuccessful.  I tried 3 times on two different Mac’s however Exif-Untrasher couldn’t restore the images from the memory 32GB memory card.

I don’t know what was different this time except the memory card was 32GB instead of 16GB.  Exif-Untrasher worked on the 16GB card but was not successful on the 32GB card.

Conclusion:  If you’ve lost some images or erased some image files from a memory card and would like to attempt to restore them, I highly recommend giving Exif-Untrasher a try.  It might not work every time or be 100% successful, however when it does work – it’s amazing!