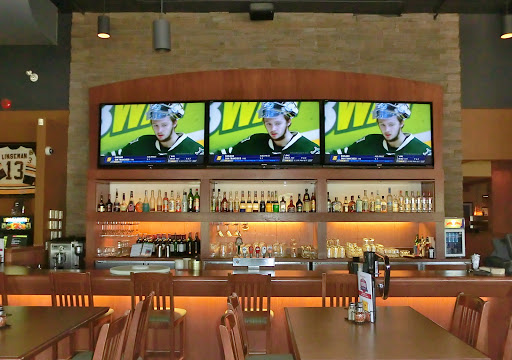 Heritage Boston Pizza recently upgraded all the TVs in the lounge and restaurant to FULL HD,  just in time for the third round of the NHL Playoffs. 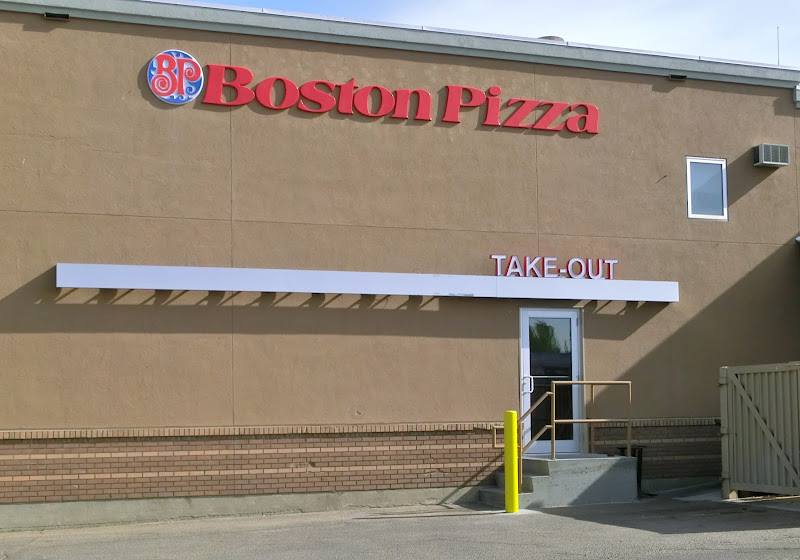 New Take-Out Entrance at the rear of Heritage Boston Pizza

The AV upgrade was part of a complete restaurant renovation which included adding a new Takeout door to the rear of the building providing greater convenience and faster service for all those finger cooking Hockey Fans.  In addition to the new take-out area, the restaurant washrooms were also moved and updated

The Takeout and Washroom construction was performed by Apex Contracting while the AV upgrade was completed by           Ion Security and Integration.

The AV upgrade was a major overhaul for Heritage including the installation of HDTV to all the TVs in the lounge and restaurant as well as installing New Sharp 70 inch, 240Hz LED TVs in the back bar and 60 inch  LG and 51 inch Samsung Flat Panels throughout the rest of the sports bar and restaurant.

The AV upgrade poised quite a challenge for the Ion installation crew.  The existing wiring was a mess.  Over the years the restaurant had been renovated several times and each time a different integrator performed the work leaving the coaxial cabling, network wiring and HD wiring in complete disarray.

Equipment Cabinet with new side ventilation

The existing system consisted of three Shaw Pace, HD Cableboxes with a single HD cable run to only the three back bar TVs.  At the time of the reno, only two of the three cableboxes were working and only one of the backbar TVs was actually able to display HD, while the adjacent TV’s looked awful with grainy SD reception. With the exception of the back bar, all the other TVs in the bar and restaurant were standard definition TVs with poor picture quality due to various wiring deficiencies and equipment problems.

Before any new TVs could be installed the complete cable grid and distribution needed to be cleaned up, rewired and in some cases completely new wire runs were pulled.

Once the wiring mess was cleaned up and proper cable signal strength restored, the next step was to install Shaw HDTV cableboxes to each TV location in the lounge and restaurant.  The price and size of digital HDTV cableboxes has dropped over the years making it economically feasible now for many installations,  to use a single HD cablebox to feed to each TV rather than using a central equipment rack with a few cable boxes and expensive HD Component or HDMI Matrix Switcher.

DTU – Direct To Unit, Cable boxes mounted behind each TV in the Bar & Restaurant

Years ago when a single HD cablebox cost $350-$700 Central HDTV Distribution made sense,  today with cableboxes under $150,  direct to unit (DTU) distribution often provides a lower installation cost and greater flexibility to the client.  DTU HDTV cableboxes provide the location the ability to watch any channel they wish on every TV  in the bar or restaurant.

Central HDTV distribution systems are limited by the number of centrally located cableboxes or satellite receivers and then further limited by the functionality of the costly HDTV matrix distribution hub.  Often central distribution systems are limited to 2 or 3 feeds and TVs are connected into groups or zones.  Without a full matrix system changing the channel on one cablebox or satellite receiver can also change the channel on other HDTV in the same group or zone.  This is often confusing for the staff to operate and potentially frustrating for patrons.  DTU is always easier for the staff to operate says Serink ,  it provides the location with ease of use, the greatest flexibility and reliability by eliminating a single point of failure often associated with Central HDTV distribution systems. 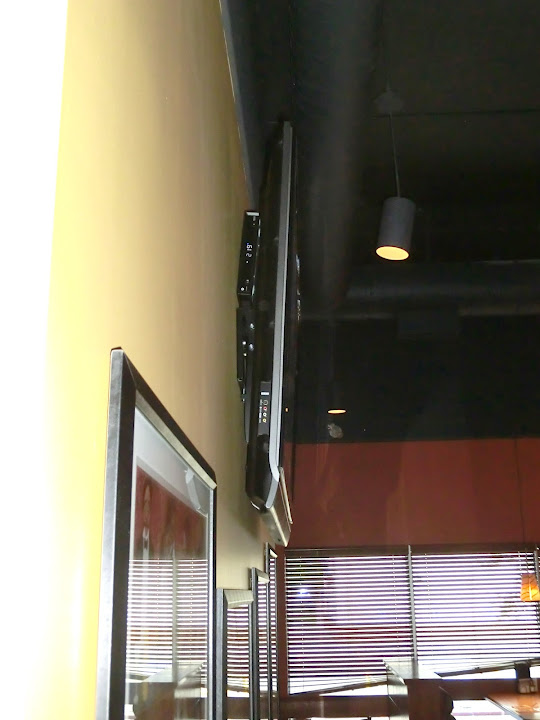 With four playoff hockey games a night during the first round of the playoffs, plus basketball and baseball also airing at the same time, having DTU HDTV distribution system allows the bar to show a different game on every TV in the joint if they want.

There are times when central distribution of HDTV makes sense and other times when DTU is a better option, it all depends on the sources available to the location and the options the location requires.

DTU is not always the best option for every location,  it all depends.  Each method of HDTV distribution has it’s benefits and drawbacks, figuring out which way to go is often complex and confusing,  that’s what I’m here for, says Serink.  I take into consideration all the factors and design a system that works seamlessly and intuitively to meet the needs, objective and most importantly budget of my clients. 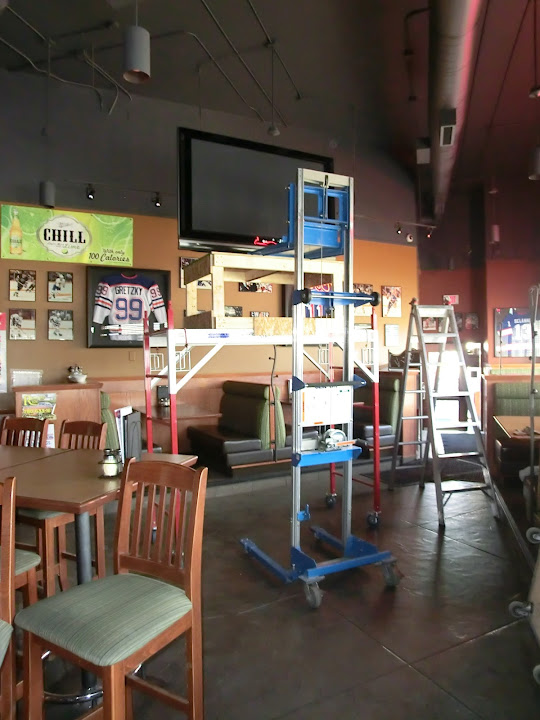 After the challenges with the HDTV cable reception were solved at Heritage the next problem was installing the Sharp 70” TVs on the back bar.  Normally we use a Genie lift to install TVs however the back bar was too narrow for the Genie Lift to fit behind so a special platform was built on top of a scaffold to allow the new Sharp TVs to be first lifted onto the scaffold platform with the Genie lift and then wheeled behind the bar and slid into place.  The existing 60” back bar TVs were relocated in the lounge and restaurant and the huge, new Sharp 70 incher’s were installed behind the bar.  One customer Michael sitting at the bar commented on how incredible the HD picture looks on the new Sharp’s … “that picture’s Sick man”.

After the TVs were all upgraded to Full HD and all the new TVs were installed Doyle and his team focused their attention to the audio system and cooling problems with the existing equipment rack.  The equipment rack was overheating due to lack of ventilation.   Several vent holes were drilled into the cabinet and covered with louvered shutters.  The redesigned DTU HD distribution reduced the amount of  heat generating components in the equipment rack so with the extra ventilation the temperature inside the equipment rack dropped significantly. 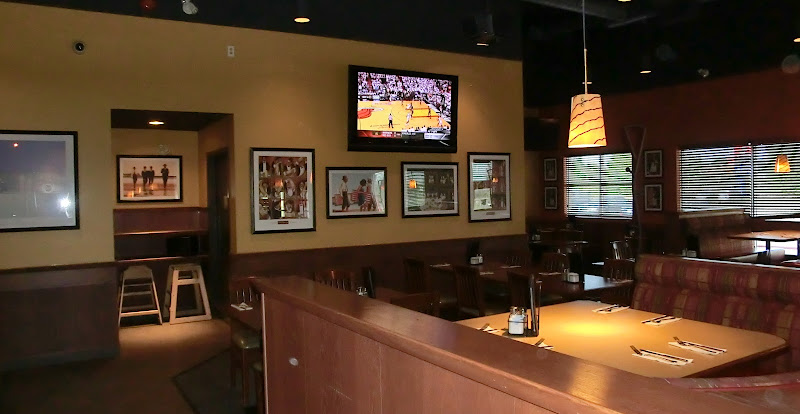 The last problem to overcome during the upgrade was loud noise bleeding in through the speakers from the restaurants portable handheld credit card terminals.  For some reason the credit card service provider decided to located the portable card terminal charging bases right next to the equipment rack causing interference and annoying beeping to bleed through the audio system each time the credit card terminal would transmit a signal through  its GSM cellular radio.  Ferrite magnets were placed on all the audio inputs and speaker lines in an attempt to minimize the interference from the credit card terminals but this solution had minimal impact and some noise could still be heard.  The only way to solve the problem was going to moving the terminals and chargers away from the audio equipment.  A suitable alternate location was found and once the terminals were moved the annoying beeping emanating  through the loudspeakers speakers stopped. 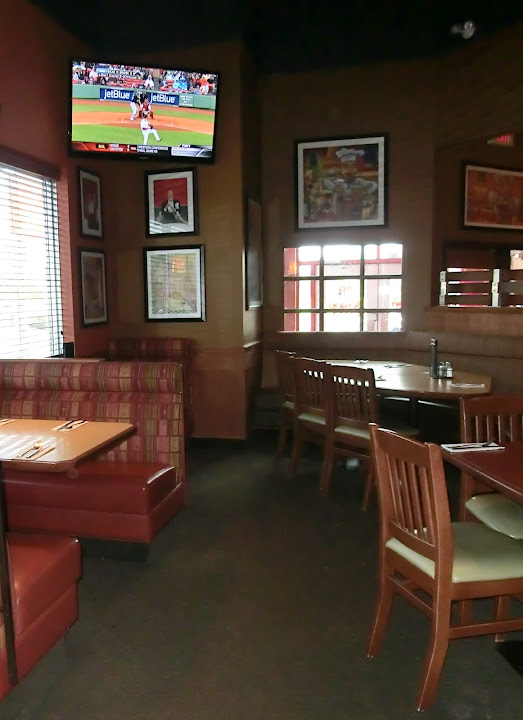 New 51″ Samsung HDTVs in the Restaurant and Sports Bar

The AV renovation at Heritage BP is now complete.  Kevin another BP customer commented how awesome the Sharp 70” TVs looked on the back bar  from outside the lounge while he was sitting in his truck in the parking lot.

We agree, Kevin,  the new back bar TVs at Heritage BP do look stunning from the parking lot but we hope you’ll come into the bar and view them from inside, up close,  where the beer is cold, the wings are hot and all the games are now being shown in FULL HD on every TV. 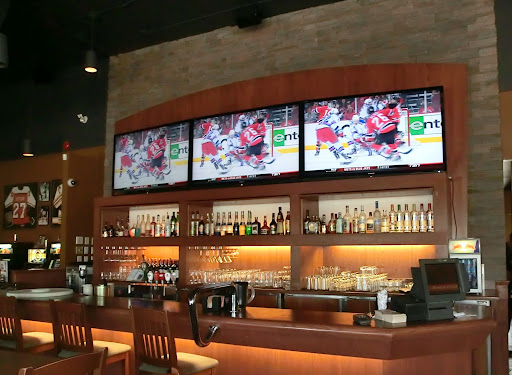