With Distracted Driving legislation everywhere talking on your cellphone in the car is not only dangerous but can be very costly.  Most states and provinces with distracted driving laws allow for some sort of “Hands Free” use of your cell phone while driving but the majority of cars on the road today do not have factory built-in Bluetooth speakers leaving millions of drivers with the choice of either expensive hardwired bluetooth systems or cheap battery powered, portable bluetooth handsfree devices.

Some battery powered Bluetooth hands free speakerphones work great while the battery is charged or plugged in, but all too often the user forgets to recharge the battery only to find out after a couple days of use the Bluetooth speaker battery is dead, usually right when you need to use it.

The folks at Griffin Technology have come out with an ingenious idea, a universal, solar-powered, hands-free, bluetooth speaker phone with pairs with any enabled bluetooth smart phone.

The SmartTalk Solar powered, Bluetooth, speaker phone mounts to the front windshield with a special suction cup cradle (similar to a radar detector) and instantly provides the driver with a high quality, hands free, bluetooth speaker phone.  The unit is about the size of an iPhone and the suction cup mount holds it securely and quietly on the windshield with no annoying rattles.  Audio quality on the SmartTalk is first rate.  The speaker is crisp and clear and goes loud enough to overcome the ambient noise in the vehicle.

On the front of the Griffin SmartTalk is a answer/hang up button, volume toggle button and speaker while on the rear is a full length solar panel.   The rear of the SmartTalk faces outward on the windshield and is exposed to sunlight and charges the internal rechargeable battery ensuring the bluetooth hands free will work when you need it … no more dead batteries and no annoying cables or cords running down your dashboard. 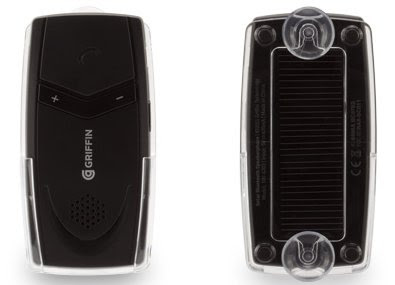 Griffin’s motion-sensing Auto Connect technology, automatically connects with paired smartphones as soon as you enter the car.  A feature called Multipoint enables you to connect up to two phones at the same time to the SmartTalk and answering the phone is as simple as pressing the talk button or by using your phone’s built in voice commands (if equipped).

My wife drives a 2003 Subaru Outback and we’ve tried Jabra and Motorola bluetooth handsfree speaker phones in the past.  Both the Jabra and Motorola units were good however my wife was notorious for forgetting to charge them, leaving her with dead batteries and no hands free many times.  The solar panel on the Griffin SmartTalk maintains the batter power and the speaker quality is as good or better than either the previous Jabra or Motorola hands-free units.  The audio quality of the microphone on the Griffin was better than the Jabra or Motorola probably because it is mounted lower on the windshield, to the left  and in front of the driver instead of the the Jabra and Motorola devices which were both sun-visor mounted.

The functionality, ease of use and features of the Griffin SmartTalk make it a great, portable bluetooth speaker phone while the price at $69.99 makes it an excellent value in this product category.