At First Glance …. Wall Mounting a Flat Screen TV seemed like a simple and easy job 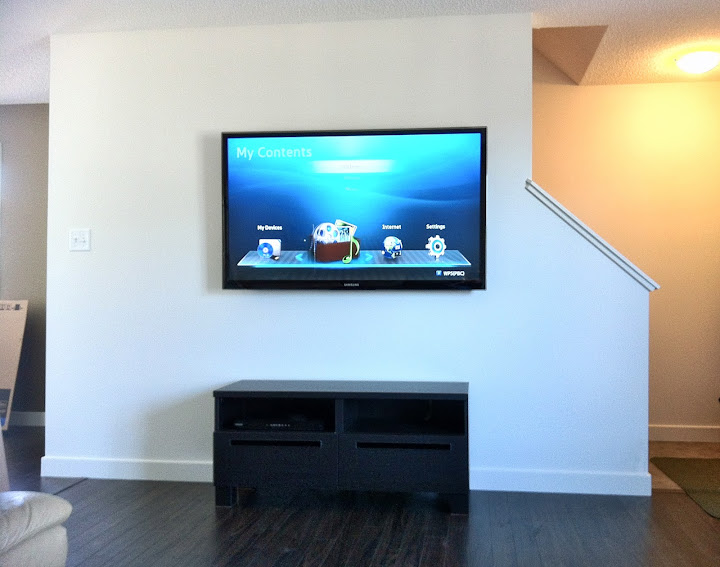 When Sarah Miller moved into her new condo she called her dad over to help her mount  her new Samsung 60” Flat Screen TV.  At first glance hanging the TV seemed like a simple and easy procedure but as Sarah and her father soon discovered mounting a TV on the wall can be a lot more complicated than originally thought.

The first problem Sarah’s dad discovered was there was no backing behind the drywall where the TV was to be hung.  To make matters worse, due to the stairway, the studs were not spaced on 16, 19 or 24 inch centers but rather spaced differently between each of the three studs he found.  Where the TV was to be located there was only a single stud for backing which was off center and certainly would not hold the weight of the TV by itself.

After determining the studs weren’t in the right place Sarah and her dad opened the TV mount box only to find out it required extensive assembly and and seemed rather large and way too deep.  Using this bracket to hang the ultra thin flat panel,  would result in the TV protruding more than more than 3 inches from the wall … This can’t be right? 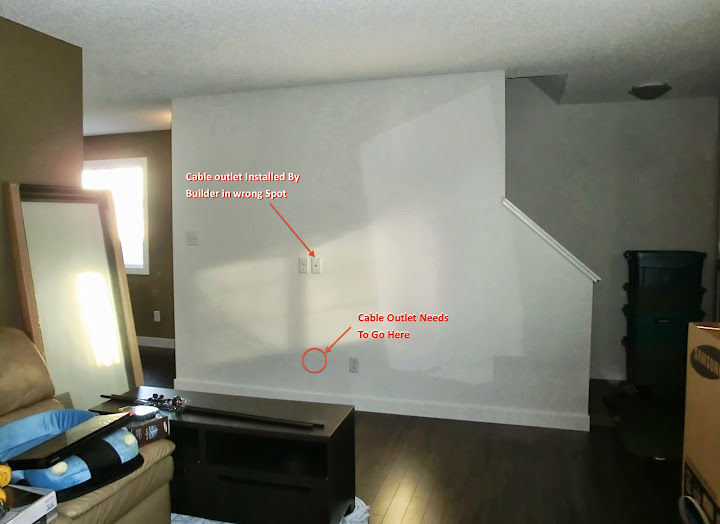 So far things weren’t looking so good for mounting Sarah’s new TV when Mr. Miller discovered a third problem.  The builder had installed the electrical outlet on the wall approximately where the TV was going to be mounted and also installed a cable outlet at the same location.  This would be suitable in the 1960’s, 70’s and 80’s when a single coax simply plugged into the back of the TV.  In today’s hi tech world of HDTV, cable boxes, bluray players and game consoles several cables including HDMI and Component Video are required to be connected to the back of the TV not just a single coax cable plug.  Sarah had purchased a stereo equipment cabinet to sit below the TV and house her Telus TV box, bluray player, and X-Box and Wii game consoles.  The builder did not provide any junction boxes or wiring ducts to enable the HDTV wiring to be fished up the wall from behind the stereo cabinet to the back of the TV.  Three strikes you’re out thought Sarah and her dad … time to call a professional.

Sarah asked her friend Allison who installed her TV and she said Doyle from Ion Security and Integration.  Sarah liked the way Doyle had mounted Allison’s TV, all the wires were concealed in the wall and the cable management was neatly done so she gave Doyle a call and booked an installation.

Steps to mount the TV:

The first step to mounting a TV is to determine the location where the TV is to be hung and then obtain the measurements of the TV and bracket to determine where on the wall the TV bracket needs to be located.

After looking at the TV mount the big box retailer sold Sarah with her TV purchase, Doyle pointed out the problems with the TV mount, especially the large distance from the wall the TV would protrude and suggested to Sarah to return the TV bracket back to the store for a refund and Doyle would provide a better, thinner more attractive ION TV mount for essentially the same cost.

Doyle marked out the locations of the studs on the wall, or in this case lack of studs or backing.  Without studs to screw the TV onto,  special drywall anchors are used to mount the bracket to the wall securely.  Doyle laid out the markings for the TV mount and screw holes but before attaching the bracket to the wall he first had to deal with the problem with the cable outlet and the need to move it closer to the baseboard. 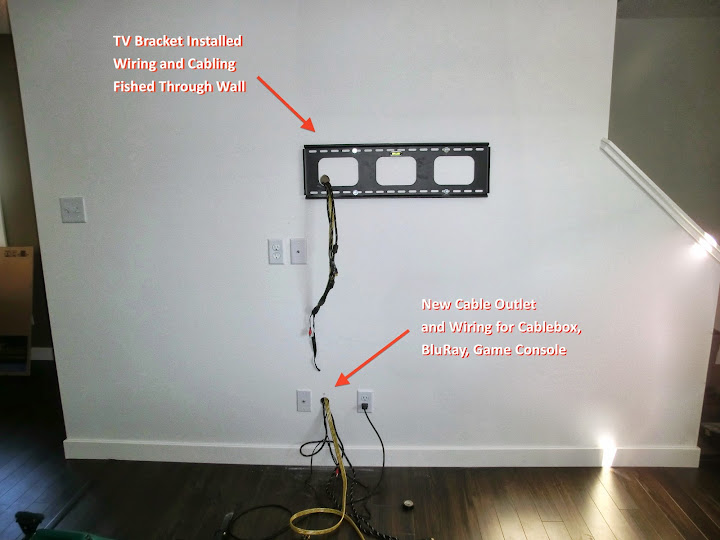 Doyle removed the existing cable outlet cover and drilled and installed a new cable outlet box directly below the one provided by the builder.  Because the cable was coming from the basement it was easy to re-route the cable to the new outlet location and then cap off the old outlet.

With the new cable outlet installed and tested it was time to mount the TV bracket to the wall.  Once the TV wall mount was in place the next step was to cut out and install junction boxes to provide in wall access for 2 HDMI Cables, 1 Component Video Cable, and 1 Audio Cable.  These cables are necessary to connect the new cable box, bluray player and gaming console to the wall mounted flat screen.

Once all the cables were fished up through the wall Doyle placed the 60 inch Samsung TV onto the newly installed wall mount and connected and neatly organized all the wires.

With the TV mounted the next step was to connect all the equipment and components, then program the TV and calibrate the color.

Most TVs right out of the box have the brightness, contrast and color settings way too high.  While this looks good in the store, once you get the TV home and set it up the over saturation of color and high contrast result in a picture that looks artificial and anything but normal.  Doyle uses a special color calibrator measuring tool and program to adjust the TV picture to obtain the highest resolution and clarity with vivid detail and true lifelike color.

The end result was another successful TV installation.  Sarah’s dad showed up just as Doyle was leaving, we’ll what do you think Mr. Miller? asked Doyle.  Looks good he replied, looking over the TV from each side and then behind the stereo cabinet, you did a much nicer job then we would have been able to do, I like how you concealed all the cables,  it’s very clean and neat.

If you need a flat panel LED, LCD or Plasma TV installed give Doyle a call at Ion Security and Integration, 780-489-5522 or email info@ionsecuritysystems.com

Click on an image below to view the slide show to see all the steps required to wall mount the 60 inch HDTV with concealed wiring.