Netflix Continues to be a Bandwidth Hog

Based on the usage numbers Netflix consumes three (3x) times more bandwidth than next nearest service Youtube with only 12.28% of peak internet traffic.

So what’s all this mean for Netflix and for the internet?  Well it means the arguments for and against Net Neutrality aren’t going away anytime soon.  It also means our Video media consumption is continuing to shift from standard broadcast and cable TV to Streaming Video and Media.

Torrent uploads and downloads account for only 5.96% of internet traffic and while this is still a concern for copyright infringement the numbers are far lower post Netflix, itunes, amazon video and hulu than they were before those services launched. 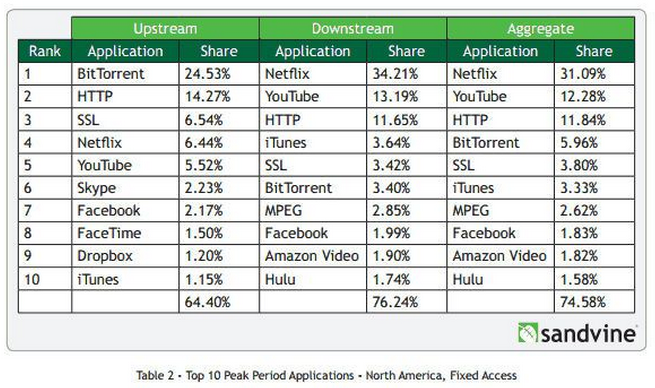 Streaming audio and video will continue to grow in the future especially as we consume more media on our mobile devices rather than our home computers or laptops.  Every cable service provider and network have already launched or will be launching a mobile viewing app so consumers can watch their favorite shows on the go.  As mobile grows so to will streaming data consumption so service like Netflix will become even bigger bandwidth hogs in the future.

What does this mean for consumers?

1 – Higher fees for Netflix and other streaming media services.  In the future Netflix and others services may have to pay a bandwidth toll to ISP’s for using their networks.  This is already happing in select markets and will continue to become the norm in the future.  If Netflix has to pay fees to the ISP’s they will have to raise their prices accordingly … this too is already happening.  Netflix announced price increases for new subscribers.

2 – Data Caps:  We are already familiar with Data Caps on our cellphone plans but many homeowners (those without teenage kids) don’t even know they have a data cap on their home internet.  Some ISP strictly enforce their data caps while others are more liberal and forgiving.  In the future tiered internet packages will become more rigid and strict as bandwidth consumption rises.

3 – Wireless Data:  Wireless data will become cheaper and data caps will increase.  This is already happening now and the trend will continue.  Wireless (Cellular) data capacity will grow, speeds will increase and prices will drop.  Wireless data may never be as cheap as wired data but some services may switch to a wireless model rather than paying ISP’s a toll to use their infrastructure.  Some companies such as alarm.com recently announce a partnership with Verizon in the US to channel all alarm.com services through Verizon 4G LTE rather than using wired ISP’s networks.  Look for more of this in the future.

4 – Mobile:  Smart Phone screen sizes and even bigger Phablet screens range between 5-8 inches.  For two thirds of the world the Smart Phone is their only internet connected device and mobile is the only wave to access the web.  Mobile data speeds in some areas now rival wired internet connections (wireless up to 250mbs) and cellular data price plans have fallen dramatically.  Two years ago 10GB a month of cellular data cost $250, today it’s $80.