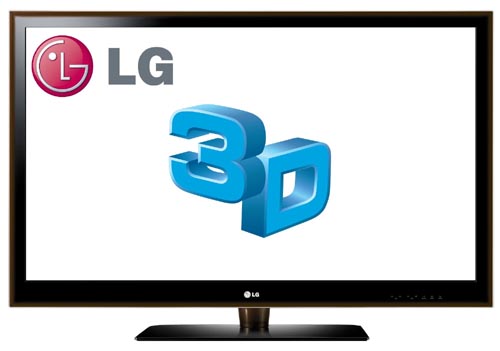 Why hasn’t 3D TV for the home taken off yet?  Some will say it’s the price, others will say it’s lack of content but most agree it’s the expensive goofy glasses.

This year at 2011 CES,  LG Electronics introduced a NEW Consumer 3D technology called Film Patterned Retarder Technology or FPR for short.  The industry is calling these new FPR 3D TV’s “Passive 3D” because they use inexpensive, light weight, un-powered, polarized 3D glasses and use a special film on the screen to create the 3D images and effects as opposed to the old Active Shutter Technology which relies on the powered glasses to sync with the TV to decode the 3D imagery.

1.)  FLICKER – a vast majority of consumers report some type of “Flicker or Motion” artifacting with Active Shutter 3D displays.  This most often occurs in a room with ambient lighting and can be minimized or eliminated by keeping the room completely dark.  We’ve never experienced “Flicker” from a Active Shutter 3D panel in a DARK, dedicated Media Room with No Ambient light.

2.) Eye Fatigue – this is related to the Flicker Problem and many viewers of Shutter Technology 3D TV report eye fatigue, soreness or dry eye after watching prolonged 3D programming.

3.) Nausea – while Flick and Eye Fatigue are the most common complaints with Active Shutter 3D TV a much smaller portion of 3D viewers report feeling sick, nausea or dizziness when viewing 3D content.  This is most often caused by the “Crosstalk” or Image Overlapping that occurs with 3D technology in and of itself however tests did show fewer complaints of dizziness or nausea with the new Passive (FPR) 3D TV than with the older Active Shutter 3D TV technology.

4.) Glasses: – Active 3D glasses are big, heavy, expensive and require batteries which if not recharged can die while you’re right in the middle of watching a moving.  Many viewers find the Active glasses heavy and uncomfortable to wear and some viewers with prescription eye glasses can’t wear the Active glasses over they’re prescription glasses.

Active Shutter 3D Technology – How does it work?
Acitve 3D or Shutter Technology consists of a display that transmits a separate image for both left and right eye sequentially at a frame rate of 120ms or faster.  The 3D imagery is decoded by special Active Shutter, Battery Powered Glasses which the viewer must wear in order to see the 3D effect.  The Active Shutter Glasses sync to the appropriate frame on the TV and alternate closing on and off light to the left and right lens of the Active Shutter glasses thus allowing only left images to be seen by the left eye and right images to be seen by the right eye – Presto 3D imagery occurs. 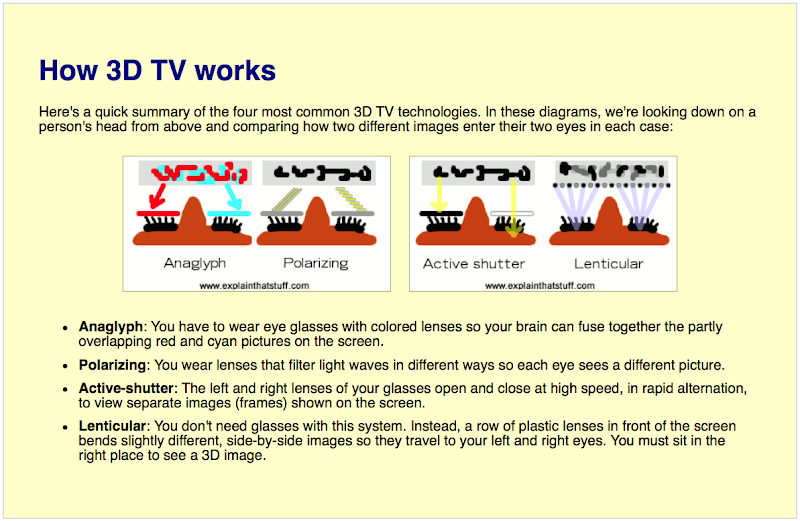 The biggest advantage of active shutter technology is that the Full 1080P(1980×1080 pixels) is produced by the panel and decoded in each eye by the glasses.  Active 3D has good vertical ad horizontal viewing angles so if you stand up, sit down or move or view your TV off axis you’ll still see the 3D effect.

The biggest benefits of Passive 3D technology are the glasses.

1.) Light Weight – Passive 3D glasses use circular polarized lenses like the ones you get in movie theaters.  Passive glasses are light weight (50-70% lighter than Active glasses)

2.) Cost Less – because there are no electronics in Passive Glasses they cost up to 85% less than Active glasses.  This translates to more viewers watching your 3D TV set which in and of itself will make Passive 3D more popular as it will be shared by more viewers.

3.) No Battery Power – Passive 3D glasses are simply polarized lenses and require no battery power and the size, weight, cost and inconvenience that goes along with that.

4.) Increased Brightness – Both 3D Technologies lose brightness however FPR – Passive 3D is said to lose “less” brightness than Active 3D panels.  While this is true most TV manufacturers can compensate for this by adding extra lamps or LED lights inside their panels increasing the effective brightness as well as the cost of their sets.  If Passive 3D has increased brightness the only real effect will be Passive TV’s should be cheaper since they require fewer lamps or LED’s to achieve the desired brightness. 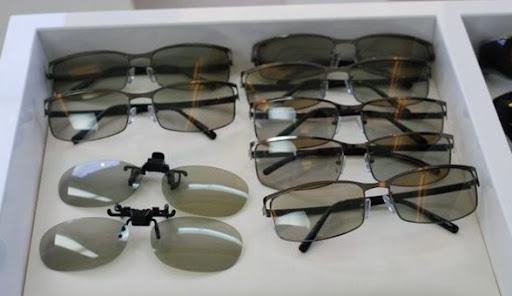 6.)  Vertical and Horizontal Viewing – Because Passive 3D does not rely on decoding or syncing with the horizontal lines on the display you can view the display sitting up or lying down and still view maintain the 3D effect.  Active Glasses require you to sit up at all times in order to Sync with the host TV set. 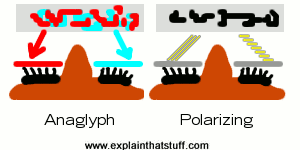 Passive 3D screens are covered with a special coating called Passive Pattern Retarder (FPR).  It’s this special coating combined with the Polarized Glasses that allows each eye to view what is is intended to see to create 3D imagery.  The Passive 3D TV displays both the left and right eye image at the same time using alternating lines of resolution.  In a typical 1080P set the odd numbered lines for example 1,3,5 …. etc would display the left eye image while the even lines 2,4,6,… etc would produce the right eye images.

There are many benefits to Passive 3D technology however it’s not without it’s drawbacks.

1.)  Resolution – The biggest criticism of Passive 3D technology is the lower 3D resolution.  With passive glasses and a typical 1080P FPR display each eye sees the 3D effect with one half the vertical resolution or 540 lines.  LG researchers found that the typical consumer finds this level of resolution acceptable and in tests some viewers didn’t even notice the drop in resolution when comparing Active and Passive 3D.  While the drop in resolution may not be noticeable when viewing 1080P Blu-ray content it’s sure to be noticeable when viewing some 3D broadcast networks who are only transmitting at 960×1080 or half 1080P resolution to save bandwidth.  Viewing these channels with Passive 3D technology will lower the effective resolution to 960 x 540 per eye or one-quarter “Full-HD” which is only slightly better than regular DVD image resolution.  Still acceptable perhaps for the general consumer viewing on a 42” flat panel but one wonders what it would look like on a 12’ Home Theater projection screen?

Passive 3D TV’s have a narrower vertical viewing angle than Active Shutter 3D Panels.  The effective viewing angle for Passive 3D is about +/- 15 degrees above or below center, varying past that sweet spot causes 3D crosstalk, doubling of images and distortion.  Active 3D displays do not have this problem but cannot be viewed when lying down or with your head titled more than 40 degrees.

When viewing a 3D program on an FPR panel one sometimes can see visible scan lines often referred to as the “screen door effect” or “venetian blind effect’.  This faint black scan bars were often seen on early 720P regular flat panel displays and it’s questionable how the general public will respond to these black horizontal lines in the picture of Passive 3D sets.

The typical regular Plasma or LCD Flat Panel has a viewing angle of 120-170 degrees depending on the quality of the Panel before a noticeable shift in color or brightness occurs.  With Passive 3D technology the 3D effect seems to diminish once you get off axis as little as 45 degrees and continues to compress the depth of image the further off axis you view the screen.  This does not happen with Active Shutter technology.

Passive 3D displays are more prone to exhibit color shifting and loss of contrast as you move off axis from side to side due to the FPR mask being applied to the final outside layer of the screen.  While this contrast and color shift is most often seen in cheap LCD TV and computer monitor panels the FPR mask narrows the off axis viewing angle even with regular 2D TV programming so be aware of this problem if you’re thinking about purchasing a 3D TV for your media or family room and will be viewing it from more than 45 degrees off access.

The last thing 3D TV needs right now is a format war but 2011 is poised to be just that for 3D TV Makers.  LG, Vizio, Philips, Toshiba and several others have adopted the Passive 3D technology moving forward while Samsung, Sharp and Panasonic are firmly entrenched in the Active Shutter 3D Camp.  Sony is currently producing Active Shutter 3D sets but has been talking with LG about Passive 3D worried that another Betamax vs VHS format war is in the works and not wanting to come out on the losing end this time.

Format wars are costly for manufacturers and confusing for consumers.  Many videophiles cringe at the thought of losing resolution with the Passive 3D technology but if history teaches us anything the cheaper, more convenient Passive 3D technology will probably win this battle just like inferior systems such as VHS won over Betamax, Blu-ray won over HD-DVD and Dolby won the battle with dbx (huh? what’s dbx? …. see what I mean).

In each of the previous format wars not only was their a different decoding technology but there was a different media format as well,  Beta couldn’t be played on VHS, Blu-ray would not work with HD-DVD and dbx cassette tapes and records could only be played with a dbx decoder unlike Dolby with could be played with or without.

At least with the current competing 3D Format Wars BOTH Active and Passive 3D decoding use the same FORMAT, so for now consumers don’t have to worry about re-buying their DVD collections if one format wins over the other.  Broadcasters too so far can plan 3D networks knowing that BOTH technologies will be able to decode their programming.

Which format will Win?  Ultimately neither, in my opinion.  Passive 3D will make huge gains over Active 3D this year not because the picture resolution is better but because it’s good enough, the passive 3D glasses are more comfortable and all in all the cost of ownership of a Passive 3D TV system will be less costly and hence more affordable than an Active 3D TV system.

Hello – this is Beta vs VHS and Blu-ray vs HD-DVD and Dolby vs dbx all over.  In each previous format war the Best “Technical” format didn’t win, the good enough, simple, easy to use, most popular, convenient and lowest cost acceptable solution won, which is exactly what’s going to occur with Passive and Active 3D TV this year.

The main reason that Passive 3D will win out over Active 3D TV is the fact that the consumer really wants NO Glasses 3D TV and views both these formats as a cross-over product until NO Glasses 3D arrives.  Knowing that NO Glasses 3D TV will eventually come,  Passive 3D TV will provide acceptable 3D picture quality, with comfortable glasses at an overall lower cost.   For 2011 it appears that Passive (FPR) 3D TV will win the battle between Active and Passive 3D TV, but although the battle may be won the 3D TV format war will continue until No Glasses, 3D TV with 1080P resolution is a reality.

Some Passive 3D TV models from Vizo and LG are available now at Select Consumer Electronics Retail Stores with more on the way.  Check out the new Passive 3D TV’s and share your thoughts we’d like to hear from you.

If you’re building a house, planning a renovation or require assistance hooking up your home audio video system give Doyle at DJ’s Sound City a call 780-489-5522 or email info@djsoundcity.com