Stony Plain Boston Pizza Renovation – Are you ready for some Hockey! 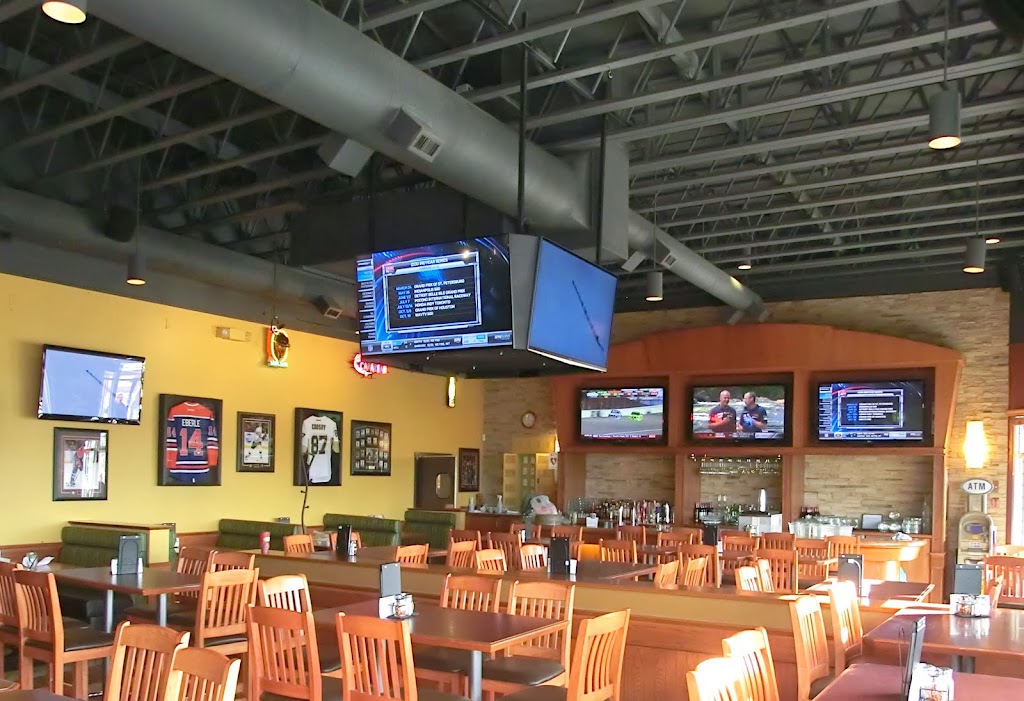 When Stony Plain Boston Pizza decided to renovate their sports bar they too wanted the bar to resemble a hockey rink arena complete with a hanging score clock.

Doyle from Ion Security and Integration was asked to design TV cluster which would be hung from the center of the Sports Bar and resemble the an NHL Arena Score Clock.

Designing a TV cluster to look like a score clock represented some unique challenges for Ion Team.  First there was the issue of weight.  The roof joists were made of wood and the structure needed to be light enough for the roof joists to safely support the load.  The next problem was the reflections for the South Facing windows.  The flat panels chosen will need to minimize the reflections from the windows as much as possible.  The third challenge was to maximize the size of the TVs and make them as big as possible yet provide adequate clearance height.  Lastly was the High Definition programming source. 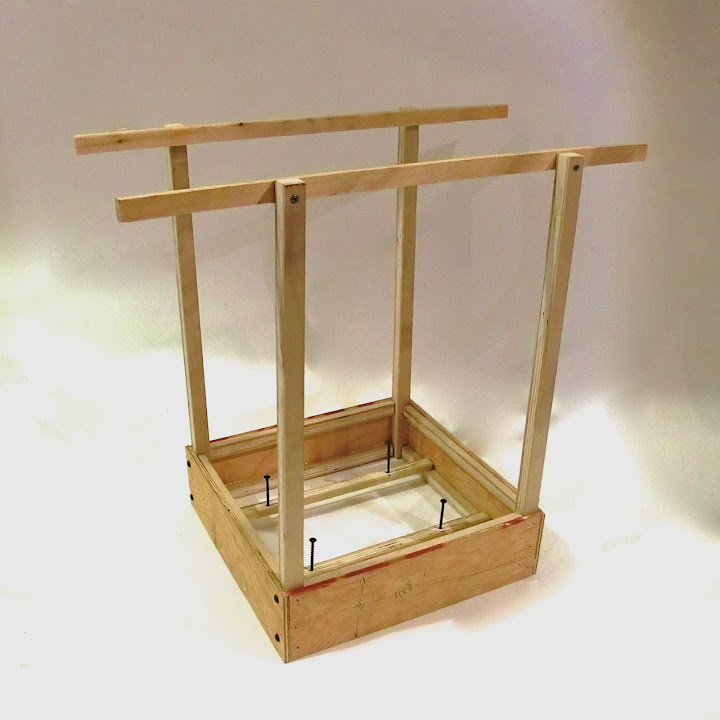 Doyle spent hours designing the score clock frame before the final draft design was ready. With the final conceptual design ready the next step was to make a wooden scale mockup to test the design and assembly.  The wooden mockup provided a better understanding of the construction requirements and revealed some potential assembly problems which were worked out prior to fabrication.  With a final “Tested” design ready for fabrication the next step was to decide on what size and brand of TVs would be used for the Score Clock. 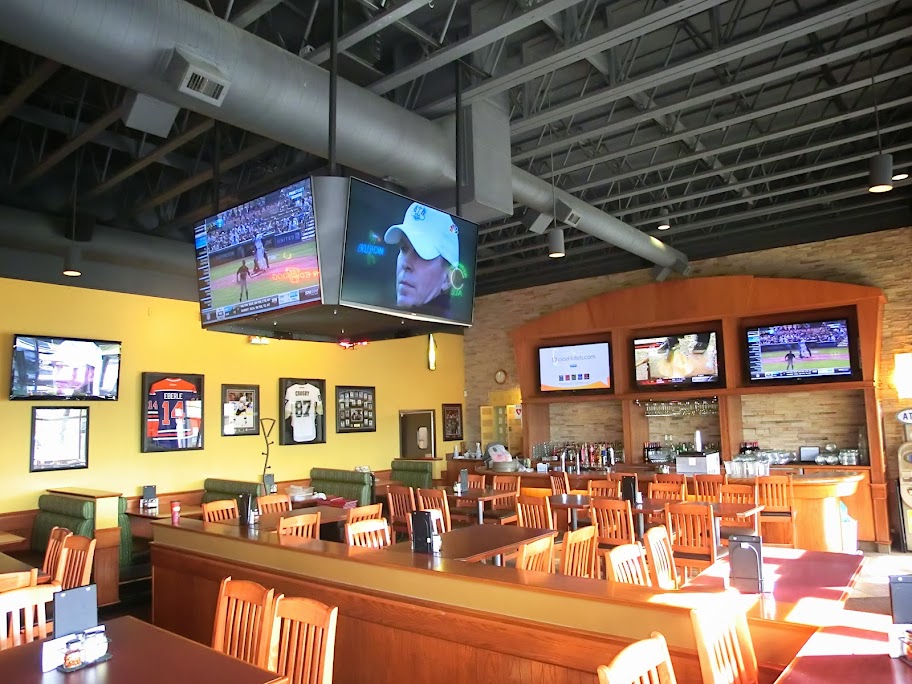 The choices for TV sizes ranged from 47 inches all the way to 70.  The goal was to go as big as possible yet leave enough room for ample clearance.  After several calculations 55 inches was determined to be the ideal size to fit the design criteria however which Brand and Model of 55 inch TV was still undecided.

Doyle considered LG, Sony, Samsung and Toshiba 55” LED TVs.  LED TVs were selected to minimize the weight and thickness of the TV.  The next criteria for the TV was refresh rate.  Since it was a sports bar the LED TV had to have a native refresh rate of at least 240hz.  The last consideration for the TVs was cost.  The TV selected needed to fit within budget for the project.  With all the specifications and pricing factored in two TVs met the criteria … Samsung and Toshiba.  Both TVs were 55 inch, 1080P, LED TVs with 240Hz native refresh rates. 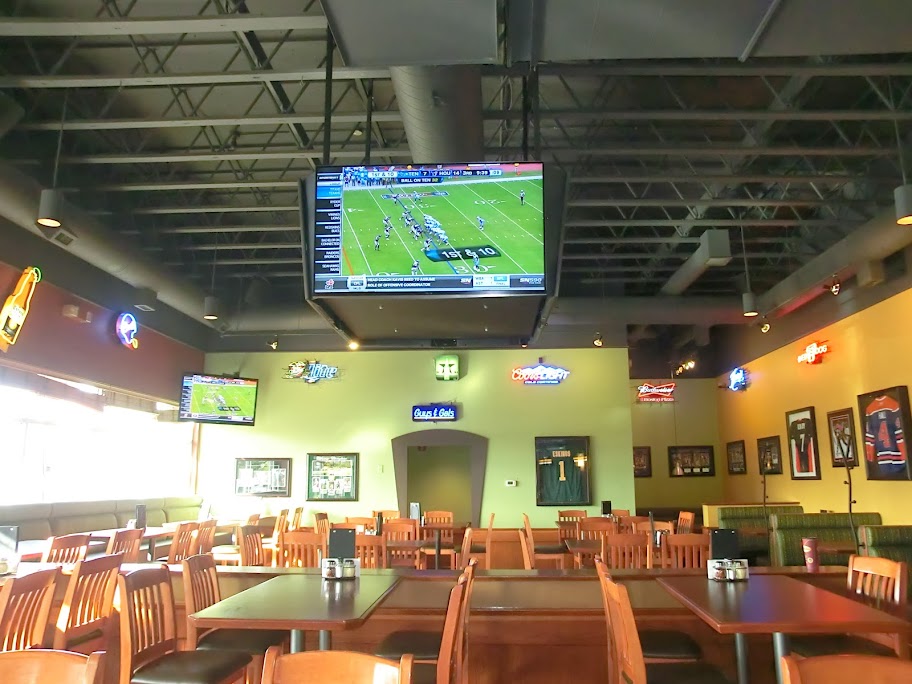 Doyle purchased one Samsung and Toshiba LED TV and tested them with various programming material side by side.  Comparing the TVs head on with the same programming material revealed some interesting results.  The Samsung 55 inch LED had slightly better contrast and color saturation but on the important tests the Toshiba surprisingly won hands down.

The bezel on the Toshiba was noticeably thinner and the weight of the Toshiba TV was also 20% lighter than the Samsung.  The LED Screen on the Toshiba exhibited less reflection than the Samsung.  The Samsung’s screen was almost glossy where as the Toshiba’s had a matte finish.  Because of the windows and neon lights minimizing reflections was important so two thumbs up for the Toshiba.  The last criteria was refresh rate.  Once again the Toshiba won this category showing no artifacting, motion blur or soap opera effect.  The Samsung had noticeable artifacating and a very pronounced soap opera effect making it disturbing to watch some programming.  After the side by side tests the Toshiba 55 inch LED TVs were selected to be the winner and chosen for the score clock TV cluster. 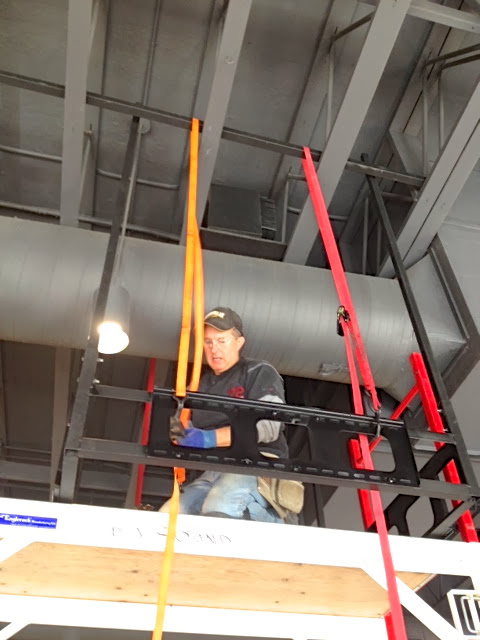 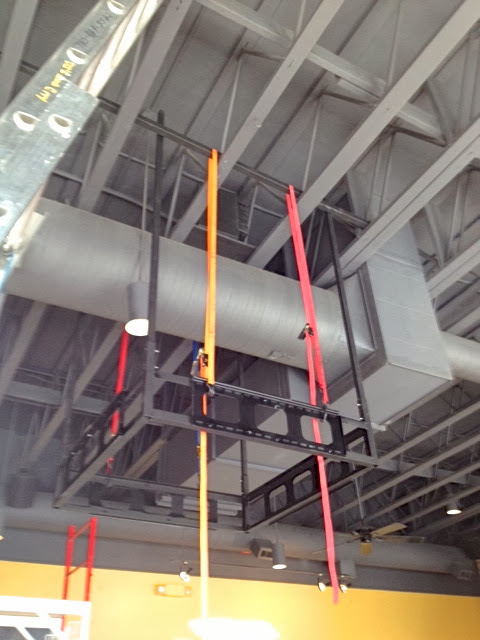 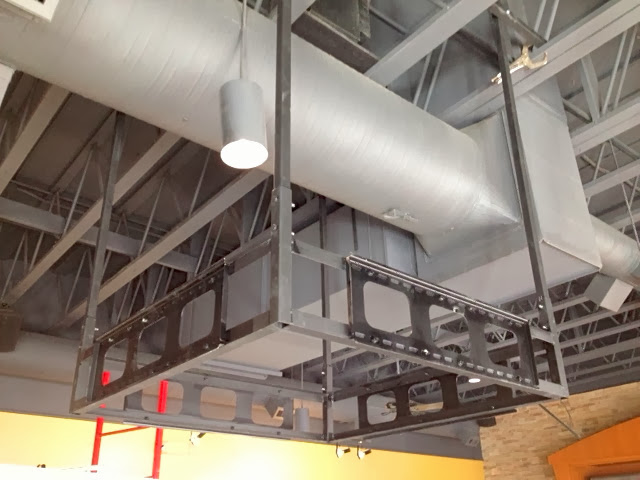 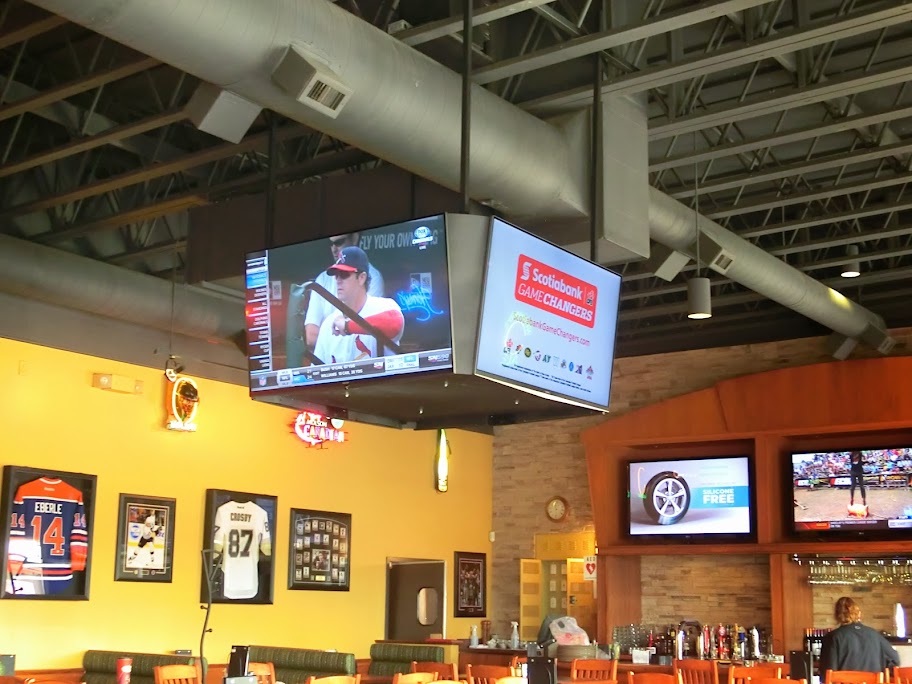 The finished score clock was a Jaw Dropper and looks Awesome.  Both the staff and customers couldn’t believe the effect the score clock had on creating a real Hockey Arena feel to Stony Plain BPs Sport Bar. 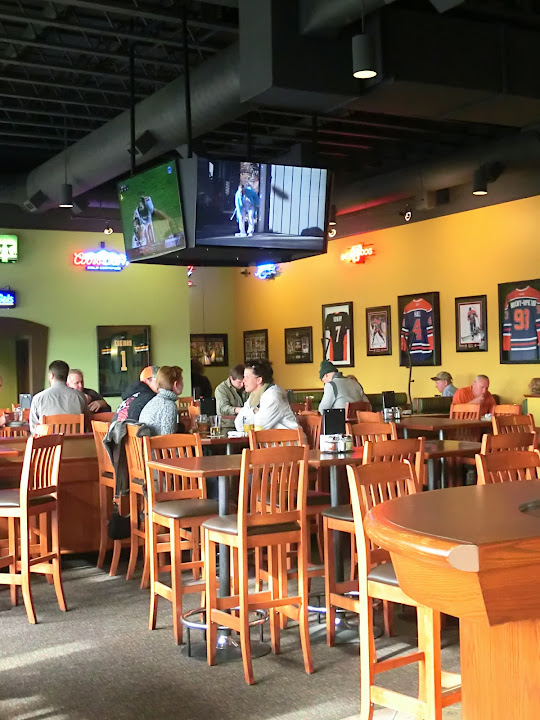 “WOW who needs to go to Rexall Place, I’d rather come here and watch the game”  … commented Larry Miller

The Stony Plain Boston Pizza renovation took two weeks to complete including the lounge and restaurant.  The general contractor for the project was Apex Contracting from Sherwood Park and the AV Integrator was Ion Security and Integration from Edmonton.

If you are interested in HDTVs, innovative AV designs, Security, Video Surveillance or Automation for your home or business give Doyle at Ion Security a call 780-489-5522 …. you’ll be glad you did.