As mentioned in a previous post last month cable wars are poised to take off again this Spring and Summer between Shaw Cable and Telus Optik TV.  Last year Telus launched it’s new Optik TV Service with a media and marketing blitz rivaled only by Apple.  Over the Summer and Fall Telus rapidly grew their installed Optic TV customer base largely at the expense of Shaw as cable customers rapidly shifted over to the new, more advanced Telus TV.  Telus added another 44,000 Optik TV subscribers during the first quarter of this year which brings the total number of Telus Optik TV to over 358,000.

Telus cast the first blow in the cable wars this spring by announcing that Facebook is now available and accessible on Telus Optik TV.
Not to be undone, Shaw Cable quietly began the soft launch of their new Shaw Gateway Cablebox in Calgary in May with a planned rollout in Edmonton in June and other city’s and regions later this summer and fall. 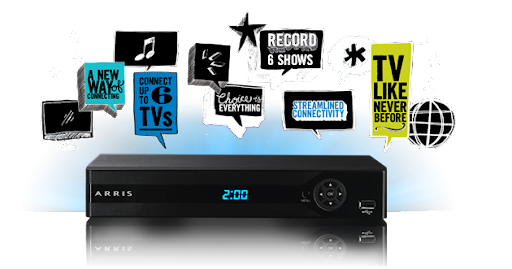 It was only nine (9) months ago that Shaw introduced their Motorola DCX3400 Dual Tuner PVR cable box and just six (6) months ago that they started selling the Motorola DCX3200 all digital HDTV cable box.  While both these Motorola Cable boxes are good, solid units they still don’t have the sophisticated features and menus offered by Telus Optik TV.

The new Shaw Cable box is made by Arris and is designed to be marketed directly against Telus TV with better picture quality, more storage and the ability to record up to six (6) HD shows at once in addition to providing users with internet access including Facebook.

The main cable box is called a Gateway Box and is installed where the cable enters the home usually in your electrical or utility room.  The Gateway Box acts as a central media hub while smaller Portal boxes are installed at each TV location.  The main Arris Gateway Box houses a 500GB Hard Drive and 6 independent TV tuners which will provide HDTV streaming capabilities to up to six (6) Portal boxes.  The Gateway will allow the user to record up to six (6) HD programs at once and watch or stream up to four (4) different HDTV and two (2) SD programs to a total of six (6) HD Portal Set top boxes. 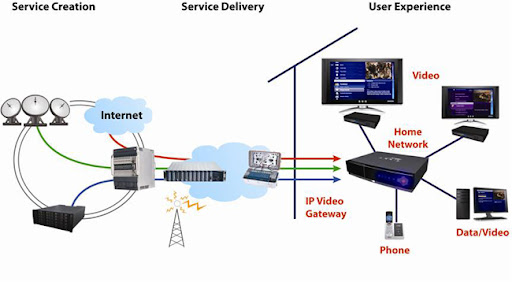 The Gateway Box has an external eSata port which can be configured to support up to a 6TB hard drive for additional storage.  Other features of the New Shaw Gateway system include Customizable user GUI, Downloadable Apps such as Flicker, Facebook and various games. A remote PVR app for iPhones and alike is said to be coming and the Shaw Gateway is said to support wireless streaming via Wi-Fi and DNLA connected devices such as game consoles, computers and Network hard drives.

PVR anywhere is included in the new Shaw Gateway which will allow the user to pause a program on one Portal Box and then begin watching it in another room on another Portal Box.  The Portal boxes are convection cooled so there is no fan noise to keep you awake making them ideal for the bedroom.

The Shaw Gateway box is connected to it’s own network separate from the internet network and Shaw phone network if you have all three services.  Because the Gateway network is separate it does not share the bandwidth with your computer or other devices therefore internet speed does not slow down when watching TV, even if maxed out watching 6 HDTV streams.  Network cabling between the Gateway and Portal Boxes is done through existing coaxial cable via a network protocol called MOCA (Multi Media Over Coax Alliance) therefore no additional ethernet or Cat5 cable needs to be ran making installation in existing homes easier than Telus TV.  For the techies in the crowd MOCA provides bandwidth capacity of about 400 Mbps.

Other features of the Shaw Gateway & Portal System Include:

Note:  Note all the features of the Shaw Gateway will be available at the time of launch and will be added and phased in over time.

If you want to see more details on the Shaw Gateway Box and what the menus, guides and GUI will look like click on this link:   Arris Moxi

The Shaw Gateway ships with one Total Home Portal and costs $598, this will allow you to watch HDTV on one (1) HDTV in one (1) room.  Additional Portals for additional HDTV sets and rooms cost $178 each.

Shaw offers a PVR Swap/ trade in program for existing customers with older HDTV cableboxes.  Not all legacy equipment is eligible for trade it – check with your Shaw CSR for details.

Shaw also offers an Easy Own option to purchase the equipment monthly rather than all at once.  Easy Own Payment options are as follows:

Summary:
Overall we like the Shaw Gateway concept, especially the MOCA network capabilities and features.  We’ve seen the Shaw Gateway in operation and are impressed with it’s picture quality however we must caution that the Shaw Gateway is new and unproven at this time.  As an early adopter you should be prepared for various product glitches and as mentioned earlier many of the features of the Shaw Gateway will not be available at product launch and in fact will be phased in slowly over the months ahead along with many firmware updates.

Recommendation:
If you are the kind of person who likes to have the latest and greatest hi-tech gadgets and don’t mind trouble shooting and working out the bugs then go ahead and order a Shaw Gateway today!

If you’re the kind of person who likes to enjoy the benefits of technology and want things to work smoothly with minimal personal involvement and troubleshooting we recommend RENTING the Shaw Motorola DCX3400 PVR cablebox as it is a proven, solid, reliable cable box which is easy to use and is equipped with most of the features you will need except for PVR anywhere.

Conclusion:
At the time we’re writing this article the Shaw’s New Gateway is only 4 weeks old and there have certainly been a number of growing pains already for the early adopters.  There are several things we like about  the Shaw Gateway especially PVR anywhere and like all new technology there are also a multitude of bugs, issues and problems with the Shaw Gateway which need to be addressed in future software updates- hopefully!

Ultimately the choice is yours – New Expensive Technology with bells, whistles and bugs or reliable, proven technology with less flashes features but rock solid performance.  Which will it be?