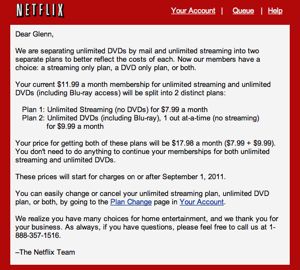 I predicted back in February one this blog netflix-monthly-subscriptions-on-the-rise  that Netflix would increase its’ monthly subscription price in Canada this fall and that prediction still holds.  I believe Netflix will monitor the the impact of it’s price increase in the USA first and use that data to determine a price increase strategy for Canada.
While the price increase in Canada may not be as steep as US subscribers, Netflix Canada will increase it’s just a question of when and by how much.

While consumer reaction in the US has been vocal on blogs, emails, chat rooms, facebook and twitter, Netflix will analyze the impact to their bottom line to determine a pricing strategy this fall for Canada.  Netflix believes that while verbal reaction is strong in the US actual subscriptions will be minimally impacted while revenues and profits will continue to rise.

The case for a price increase in Canada is much stronger that the US because up in Canada Netflix has little or No Competition.  In the USA Netflix has Amazon, Apple, Hulu, Boxee, Google TV and others waiting for the opportunity to scoop up disgruntled Netflix Customers, in Canada most of Netflix competition comes from Cable and Satellite Companies expensive VOD and PPV services rather than Direct Streaming via the internet competition.

If Netflix doesn’t raise their price in Canada this fall look for a price increase to be announced in Canada for February or March 2012 after the Christmas holiday and buying season.

Based on the US pricing and Canadian operating costs we predict Netflix to bump their Canadian pricing to somewhere between $9.99 – $12.99, it’s just a matter of time.

for more on Netflix Canada read our recent post:  Is Netflix Doomed After Price Increase?

7 Responses to Netflix Price Increase Coming to Canada TOO!